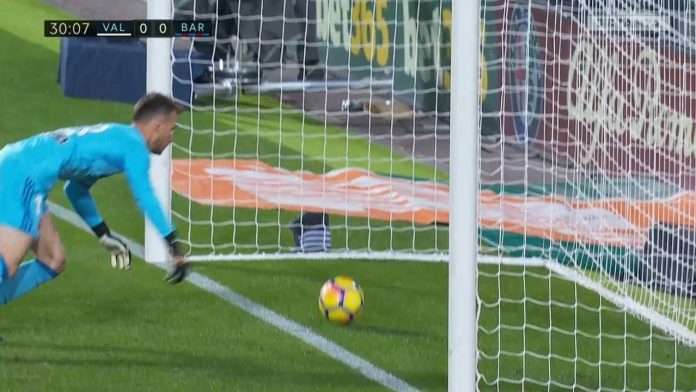 Valencia welcomed league leaders Fc Barcelona at the Estadio de Mestalla for an appetizing encounter between 1st and 2nd place in the La Liga table.

The 1st half of the game ended goalless, the 30th minute of the game was very controversial as Lionel Messi’s goal was disallowed for not crossing the goal line but replay clearly showed that the ball crossed the line and shouldn’t have been disallowed. The decision left Messi and his team mates were furious at the the match officials for disallowing the goal. According to Barcelona defender Jordi Alba, he claimed that he could see that the ball cross the line from his position in the midfield.

The flood gates opened up in the 2nd half of the encounter as Rodrigo opened the scoring for Valencia in the 60th minute as he shoots a low shot from close range leaving  ter Stegen helpless and stranded. Jordi leveled the game with a half-volley in the 82nd minute after he connected to a perfect pass from Lionel Messi.

Both team had to settle for a controversial 1-1 draw which which will raise questions to the Spanish FA on if Technology (GOAL LINE & VIDEO ASSISTANT REFEREE) should be introduced into La Liga.