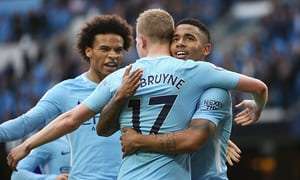 Pep Guardiola’s men were once again outstanding as they thump Stoke City 7-2. Gabriel Jesus opened the scoring 17 minutes into the game with a simple tapping to beat the stoke keeper, 2 minutes later Raheem Sterling double the lead. David Silva made it 3 nil as he marks his first goal of the season.
Stoke City pulled one back by Diouf at the stroke of half time. A Kyle Walker own goal gave stoke city a glimpse of hope for a possible comeback just before Jesus doubled gis tally in the 55th minute. 5 minutes later Fernandinho had an astonishing cracker from outside the box to make it 4-2. Sane and Bernardo Silva were also in the score sheet to make it a 7-2 victory to the blue side of Manchester as they Top the league after their neighbors played out a goalless draw at Anfield.