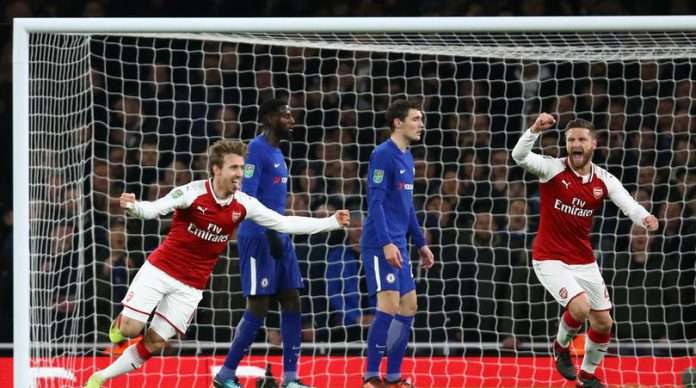 After a goalless first leg at Stamford Bridge, Arsenal Fc Came from a goal deficit as to beat fierce rivals Chelsea 2-1 at the Emirate Stadium as they advance to the Carrabao cup finals.

The home side lacked concentration from kick off and Eden Hazard punished the gunners 7th minute with a well taken strike. 0:1.

Arsenal drew the game level 5 minutes after the opening the goal with an Own Goal. Nacho Monreal header from a corner kick bounced off Marcos Alonso and then Rudiger before beating Caballero in between the sticks.

Arsenal was in the lead for the first time in the game in the half hour mark. Xhaka was the quickest to react to a heavy deflection from Rudiger inside the box. The Swizz midfielder showed great determination as his goal earned Arsenal a spot at the Carrabao Cup finals.