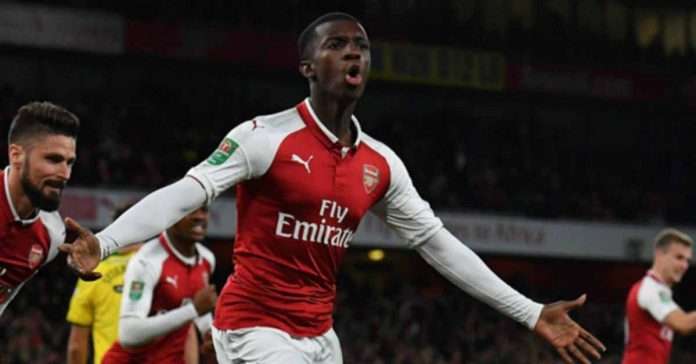 Extra time goal from 18 years old Edward Nketiah ensured Arsenal’s passage to the last eight of the Carabao Cup as they beat Norwich 2-1 at the Emirates Stadium.

Josh Murphy‘s first half goal gave Norwich the lead, before is was concealed out by Edward Nketiah‘s 85th minutes strike. The game went into extra-time, and the 18 years old forward got his brace when his header found the back of the net from a resulting corner to qualify Arsenal for the next round.

Goals from Jack Simpson, Callum Wilson and Benik Afobe ensured Bournemouth advance to the next round as the best Middlesbrough 3-1 at the Dean Court.

Crystal Palace crashes out the competition as they were humiliated 4-1 by Championship side Bristol City.

Leicester City record there second win under caretaker coach Michael Appleton as they best Leeds 3-1 to qualify for the next round.

Pablo Hernandez gave Leeds the lead in the 26th minutes before first-half goals from Kelechi Iheanacho, and second-half goals from Islam Slimani and Riyad Mahrez gave the Foxes a well deserved win to advance to the next stage of the competitions.

After Saturday’s disappointing defeat against Huddersfield, Man United returned back to winning way as they beat Swansea City 2-0. Jesse Lingard‘s brace ensured Mourinho‘s United moves to the quarter final of the Carabao Cup.

Premier League table toppers were held to a goalless draw at the Etihad by Championship side Wolves. The game went into extra-time but the Citizens were unable to break the visitors resolve.

Goal Keeper Bravo saved 2 penalty before Aguero scored a Panenka, as City wins 4-1 on penalties to advance to the next round of the competition.