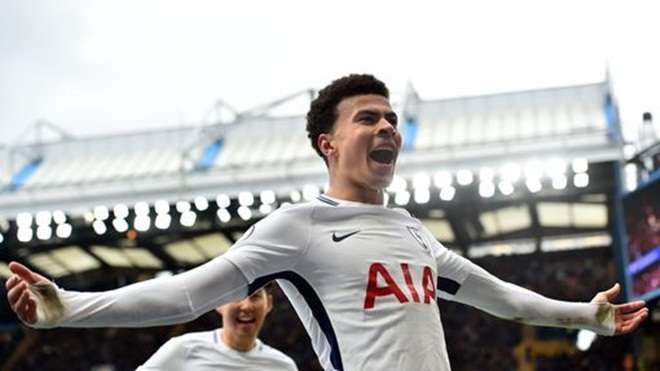 Arsene Wenger’s Arsenal side beat relegation threatened Stoke City 3 nil at the Emirate Stadium.
The first half ended goalless and the home team was booed by their supporters going into the second half break.

74′ Arsenal were awarded a penalty kick as Bruno Martins Indi makes a rough tackle inside the box.

75′ Pierre-Emerick Aubameyang takes responsibility of the spot kick and coolly converts to give Arsenal the lead. 1:0.

86′ Pierre-Emerick Aubameyang completed his brace as he was in the right place at the right time as he pounced on a rebound inside the box into the right side of the goal.

88′ Arsenal were awarded a second penalty and Pierre-Emerick Aubameyang denies himself his first Hat-trick as he leaves it for Alexandre Lacazette.

89′ Alexandre Lacazette shows composure as he converts from the spot kick to give Arsenal a comfortable win. 3:0. 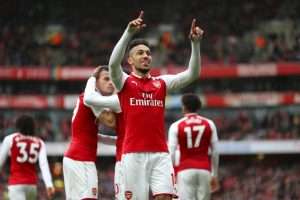 Chelsea welcome London rivals Tottenham Hotspur to Stamford Bridge for a crucial encounter for a fight for a top four finish. Coming into the game, the visitors have failed to win a match at the Bridge since the Premier League era.

30′ Chelsea took the lead with a classic goal. Victor Moses precise cross into the box was misjudged by keeper Hugo Iloris. An unmarked Alvaro Morata Morata made no mistake as his powerful header went into an empty goal. 1:0.

45+1′ Tottenham drew the game level with a sensational goal from Christian Eriksen. The midfielder released an unstoppable screamer from outside the box into the roof of the net leaving the goal keeper stranded. 1:1.

62′ Tottenham Hotspur took the lead for the first time in the game with a well combined goal. Eric Dier long pass into the box was met by Dele Alli who showed great composure with his first touch and quicky burried the ball into the right side with a slight touch of the post. Great goal! 1:2.

66′ Dele Alli completed his brace with a scrappy finish inside the box from a rebound. 1:3.

74′ Harry Kane was introduced into the game unexpectedly after 3 weeks out with an ankle injury.

The win puts Tottenham in 4th place, 8 point above Chelsea as they move closer to a spot for Champions League football. 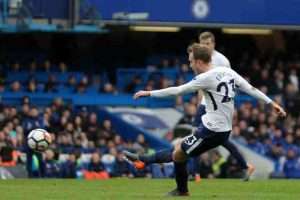