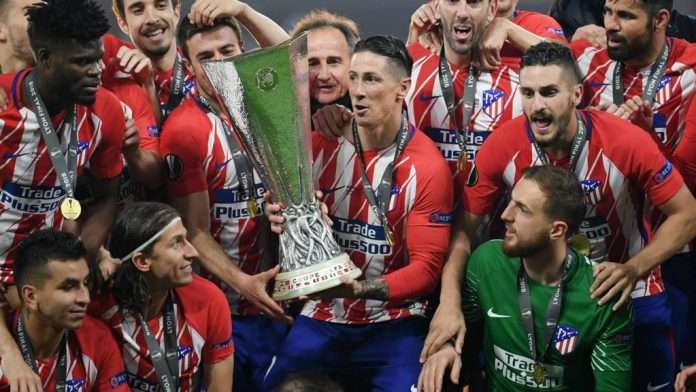 Diego Simeone’s warriors proved to be too strong against Olympique Marseille in the Finals at the Parc Olympique Lyonnais as they won 3 nil.

21′ Star striker Antoine Griezmann capitalizes on a terrible defensive error and makes no mistake as he buries the ball into the back of the net. 0:1

32′ Marseille star player Dimitri Payet night came to a sudden end as the French star was substituted with what seems like a hamstring. Coach Rudi Garcia had to change tactics as he introduced Maxi Lopez.

49′ Antoine Griezmann felt more at home as he grabbed his brace for the night. He showed great determination to reach to Koke’s pass ant the French star chipped the ball past Mandanda. 0:2

89’ Atletico skipper Gabi who scored his first goal in 2 years puts the icing on the cake with a low powerful finish into the bottom left corner to put the game beyond Marseille. 3:0

Skipper Gabi handed the trophy to Fernando Torres to lift as a farewell gift to the striker who departs at the end of the season.