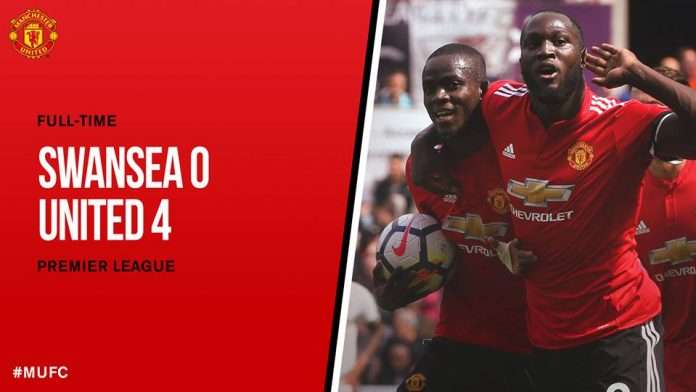 Manchester United beat Swansea 0-4 at home to make it two wins from two keeping their second consecutive clean shit this campaign in the Premiere league.

Both teams hit the cross bar inside the first 10 minutes of the game. Eric Baily opened the scoring at the stroke of half time, he was the quickest to react to a rebound inside the box to find the back of the net.

In the second half Manchester United boss Jose Mourinho made a double change in 75th minute of the game introducing Martial and Fellaini in place of Rashford and Mata.

Manchester united then scored 3 goals in 4 minutes, the first coming from Lukaku with a fantastic pass from Mkhitaryan. Mkhitaryan with a fantastic run almost 40 yards with a well timed through pass to Pogba who chipped the ball through the Swans keeper to make it 3 nil.

Paul Pogba with a counter attacking run found Anthony Martial who put the icing on the cake with a clinical finish at the bottom right of the post to make it 4 nil.

Henrik Mkhitaryan was awarded the man of the match for his outstanding performance.

Do you think Manchester United will win the League?