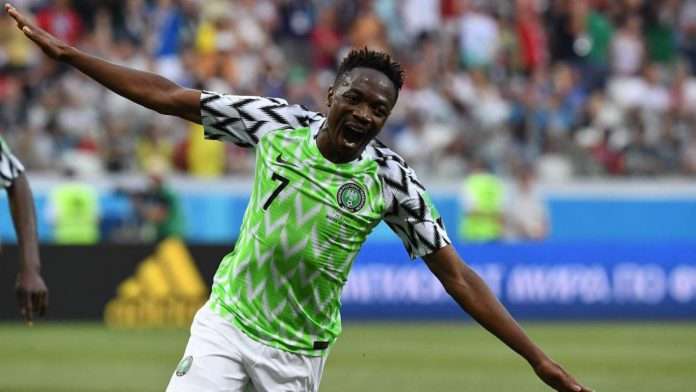 The Super Eagles of Nigeria defeated the Icelanders two goals to nil Volgograd Arena in Volgograd in their 2nd group D match.

Russian based striker Ahmed Musa was in sensational form as he bagged a brace against a very rugged Iceland team.

Musa opened the scoring in the 49th minute after a creative inter change of passes between the Nigerian players. Musa showed his ball control as he brought down a heavy pass with his right foot before striking an unstoppable shot into the middle of the goal. 1:0

Individual brilliance came into play as Musa completed his brace in the 75th minute. The Leicester forward soar through the opposition defense with blistering pace and skill before releasing the trigger inside the box. His effort is unstoppable as it went straight into the right side of the goal.

After VAR consultation, referee Matthew Conger awarded a penalty kick to Iceland after a reckless challenge by Tyronne Ebuehi inside his own box. Gylfi Sigurdsson takes the spot kick but he blasts the ball over the cross bar and into the crowd.

Nigeria are in 2nd position in the “Group of death” with 3 points behind group leaders Croatia who defeated Argentina 3 nil last night. Nigeria will face Argentina in the final group game while Croatia will play Iceland.