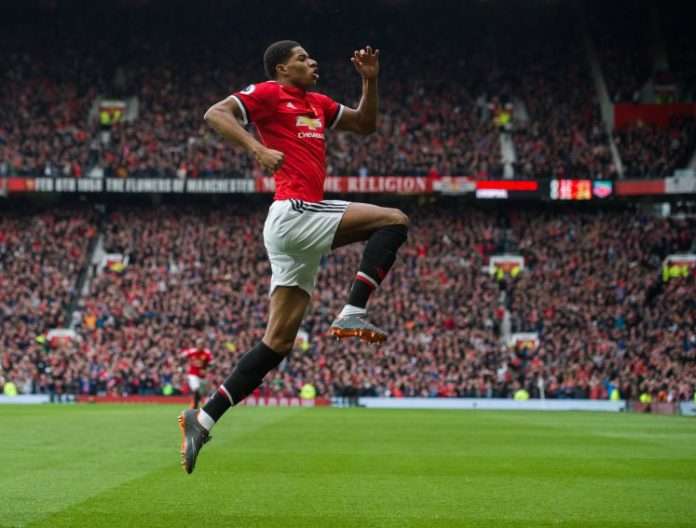 Manchester United edged past bitter rivals Liverpool in one of the oldest rivalries in English football at Old Trafford.

The battle was between the two heavy weight was for a 2nd place finish in the League table. Before the contest, Manchester united were above Liverpool with 2 points.

The home side were off to a perfect start with two first half goals.

14′ Marcus Rashford shows great skill and a eye for goal. He beats Alexender Arnold in the left side with pace and then cuts back skillfully before a firing a finessed shot with his right foot into the bottom left corner to beat the outstretched Kurius. 1:0.

24′ Marcus Rashford doubled the lead for the home team as he was well positioned to strike a rebound from inside the box. His shot took a slight deflection off Alexander Arnold to leave the goal keeper stranded. 2:0

66′ The away side pulled one back as they were gifted an own goal from Manchester United defender Eric Bailly. The defender failed to deal with a cross from inside the box which ricochets off his knee and ibto the back of the net. 2:1

The first half ended goalless as both teams failed to find the back of the net.

The second half was the exact opposite of the first as it lived to expectation.

60’The home team was gifted the lead with an own goal from whose failed attempt to clear the ball ended at the back of his own net leaving the goal keeper stranded. 1:0.

76′ New Turkish acquisition Cenk Tosun doubled the lead for Everton with a sublime through ball from Leighton Baines inside the box. The strike showed no room for mistakes as he slams the ball into the top right corner. 2:0

80’Brighton defender Anthony Knockaert was shown a straight red card by the referee for a challenge on his opponents.

88′ Wayne Rooney failed to convert a penalty as Mathew Ryan pulled off an outstanding save to deny Rooney. 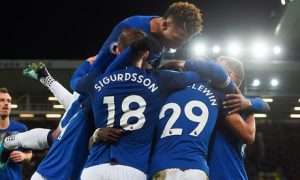 Newcastle trash struggling Southampton who have failed to win any of their last three matches.

2′ The home side were off to a perfect start with an early goal from Kennedy just 2 minutes into the contest,

29′ Kenedy completed his brace for the evening after receiving a prices pass from Dwight Gayle. Kenedy shows great composure to as he buries the ball into te back of the net from close range. 2:0.

57′ Matt Ritchie put the nail on the coffin as his goal secured a much deserved win for the home side. He recieves a great ball from Jonjo Shelvey and hits a strike from the edge of the box ito the bottom left corner. 3:0. 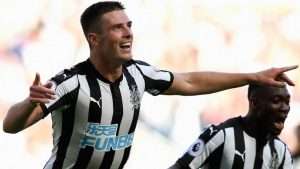 West Brom suffered a heavy defeat at the Hawthorns by Leicester City who came from a goal down to win 1:4.

8′ Early in the game, Jose Rondon opened the scoring for the home side. The striker shoed great composure with his superb first touch from a perfect Oliver Burke cross. Rondon accurate shot flew straight into bottom left corner after hitting the post. 1:0.

21′ Leicester City drew the game level with an amazing goal from a man who enjoys scoring against the “Baggies”. Vardy’s moment of individual brilliance was crowned with a thunder-bolt strike from the edge of the 18 yard box into the bottom right corner. Wonderful goal! 1:!

62′ Want-away winger game the away side the lead with a clinical goal. The winger lobs the ball over Ben foster who came rushing through into back of the net. 1:2.

76′ Kelechi Iheanacho doubled the lead with a well timed header into the middle of the goal after a perfect cross. 1:3

90+3 Iborra put the icing on the cake as he shows great positioning to plant his header under the cross bar. 1:4 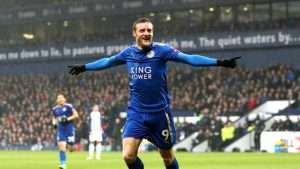 The first half ended goalless as both teams failed to find the back of the net.

66′ In form midfielder Ashley Barnes opened the scoring with a first time cracking effort on the edge of the penalty box into the top right corner of the goal. What an outstanding goal. 0:1.

70′ Chris Wood receives a lovely pass from Aaron Lennon. Wood tries a shot from close range and the ball ends in the back of the net. 0:2

81′ Chris Wood completed his brace as he increase the frustration of the home team. He was at the right place as a rebound falls to his feet inside the box. He strikes from close range to bury the ball into the back of the net. 0:3 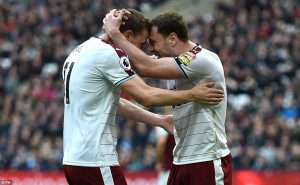 Chelsea welcomed Crystal palace to Stamford Bridge for London Derby. Chelsea needed maximum points in their quest for a top for finish while Palace are stuck in relegation waters.

25′ william opened the scoring for the home side with a brilliant run as he went past few defenders and strike an accurate low drive into the bottom right corner. What a great goal from the Brazilian. 1:0.

32′ Chelsea’s advantage was doubled after a Martin Kelly own goal. A clumsy mistake deep inside the box as the ball ricochets off him into the back of his net. 2:0.

90+ van Aanholt scored his 2nd goal in his last two matches for the Eagles but it proved to be more of a consolation as they deny Chelsea a clean sheet. 2:1. 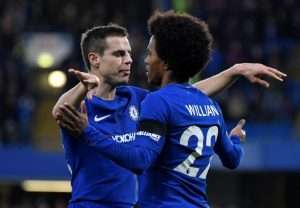