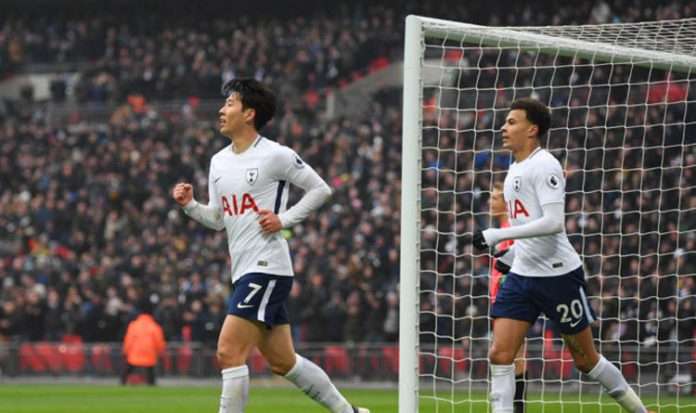 Burnley showed character and fighting spirit as they come from a goal down to defeat Everton at Turf Moor.

20′ The home team were a goal down courtesy of Everton new Turkish acquisition Cenk Tosun. Theo walcot cross into the box was flicked on to Cenk Tosun whose powerful header flew into the bottom right corner. 0:1.

Burnley manager Sean Dyche in the beginning of the 2nd half introduced Chris Wood in view to change the complexion of the game. His substitution seem to pay off as the momentum of the game swung in favor of the home team.

56′ The home side drew the game level with a great goal. Ashley Barnes connects to a Matthew Lowton sublime up through pass from the half way line. The Austrian striker showed great composure as he strikes the ball into the middle of the goal past goal keeper Pickford. Game on! 1:1.

80′ Burnley were ahead for the first time in the game after Everton failed to deal with a corner kick. Half time substitute Chris Wood showed great desire as his header from close range was buried into the bottom left corner to send the home supporters into a frenzy! 2:1.

86′ Ashley Williams was shown a straight red card for an elbow challenge from a set piece in the opposing half.What a shame! 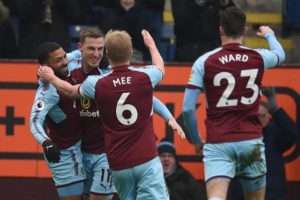 Leicester City left it late to salvage a point in a dramatic encounter against Bournemouth at the King Power Stadium.

35′ Bournemouth opened the scoring as they were awarded a penalty as Albrighton fouled an opponent inside the box. Josh King stepped up and took responsibility for the spot kick which he converts to put the Cherries in the lead.

90+7 Riyad Mahrez scores a fabulous free kick from yards out with seconds away from the final whistle to send the home supporters into a frenzy! What a great game of foot ball as both teams had to settle for a point each 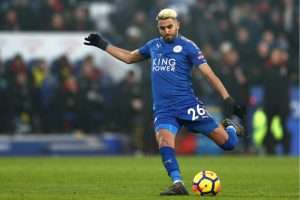 Both teams lacked creativity in the final half and were short of goal scoring opportunities as the game ended goalless. Southampton awful home performance with the job of the manager hanging on the line.

8′ Early in the game, the home side were in front after superb low long range shot from Sung-Yong Ki that flew into the bottom right corner. 1:0.

32′ Mike van der Hoorn doubled the lead for the Swans with a great header from close range into the bottom right corner of the goal. 2:0.

48′ Andy King was at the right place as a he taps in from a rebound that luckily fell to his feet almost on the goal line. 3:0.

63′ Swansea were awarded a cheap penalty kick after a foul from Cheikhou Kouyate. Jordan Ayew steps up and coolly converts the spot kick to pile up the humiliation for the visiting team. 4:0.

79′ Michail Antonio scores his second goal in two games but the goal seem to be more of a consolation as Swansea ran away with a comfortable 4:1 win. 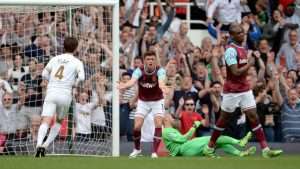 High flying Tottenham Hotspur welcomed Huddersfield to the Wembly Stadium in their plight for a top four finish in the English Premier League.

20′ South Korean super star Son put the home side in front with a superb goal after a great team effort.

58′ Son completed his brace for the evening with a superb header from inside the box. Harry Kane magnificent cross met Son who made an incredible run from midway to finish with a first time header leaving the onrushing goal keeper helpless. 2:0.

Final score at Wembly, Tottenham 2 Huddersfield nil. Eight straight home win in a run for Tottenham as they prepare to welcome Juventus in a Mammoth Champions League Encounter. 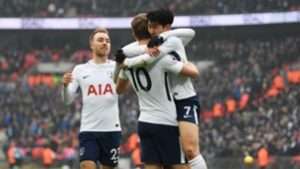 The only goal at Vicarage road came from Captain Deeney who scored the winning goal last week against Everton.

77′ A superb through pass from Hughes sets up Deeney for one on one opportunity with the goal keeper. The Watford skipper showed great composure as his strikes hits the top corner of the goal. What a great goal!. 1:0.

Poor performance from the away team and the manager Alan Pardew whose departure from the club is inevitable. 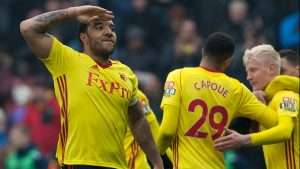 Rafael Benitez returned to Anfield with his Newcastle side after his departure from the Club. Liverpool needed a win to move into 2nd place in the table above Manchester United in their fight for a top 4 finish.
40′ Alex Oxlade Chamberlain finds Mohamed Salah with a sublime through ball that presented him with a one on one opportunity with the goal keeper. The Egyptian Magician showed great composure as his strikes hits the top corner of the goal. 1:0.

55′ The Reds doubled their advantage just 10 minutes into the second half. Sadio Mane receives a killer pass inside the box and makes no error as he buries the ball inside the right hand post. 2:0.

Newcastle long term losing streak at Anfield continues as Liverpool beat Newcastle 2 nil as they prepare for their Champions League encounter with Porto. 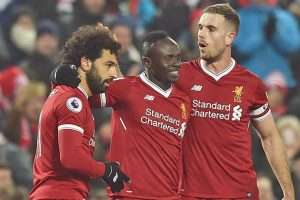