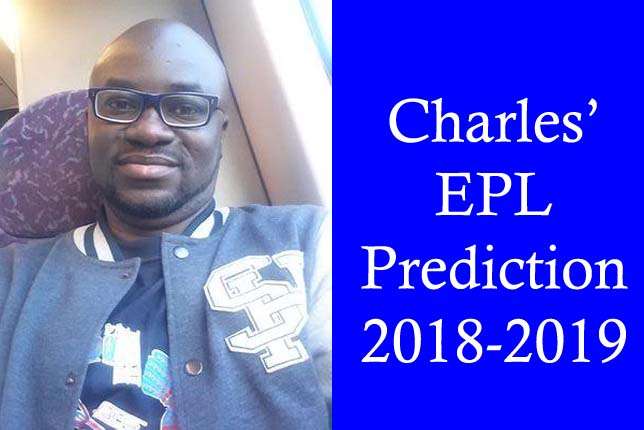 As the 2018-2019 Premier League season starts on Friday the 10th of August 2018, Charles predicts the title winners and the top four finish.

Undoubtedly, the favorites to win the EPL for this season by my reckoning is Manchester City. Having broken EVERY known footballing record last season and being the first team EVER to do the centurion in the Premier League era, puts City as clear favorites to continue from where they stopped last season. When one considers the fact that in Pep Guardiola, they have a master strategist and a serial winner, it becomes all the more undebatable.

Pundits and fans alike may argue that no one team has successfully defended the Premiership title before and that that will work against City. However, they fail to take into cognisance that Pep has done it in Spain and Germany. Additionally, he has a young, talented and very ambitious squad.

With the acquisition of Mahrez , the attacking third has been incrementally strengthened. In defense, the return of Benjamin Mendy at left back is also huge. It’d bolster a defense that was impregnable with a defensive midfielder in Delph filling that position for most of last season.

In the final analysis, Pep Guardiola and his City team stand heads, shoulders , knees and toes above the other 19 teams. The title is theirs to lose.

The other traditional contenders ( in this case pretenders) to the title, in my opinion will be Arsenal, Liverpool and United in that order.

Arsenal has done good biz in the transfer market and replaced their manager of 22years with an Unai Emery whose tactical genius is not in doubt. With his philosophy which fits perfectly into the Emirates set up, he has the personnel to give City a run for the title. How far this run is sustained, remains to be seen.

Liverpool on the other hand had a very decent last season but mucked up when the chips were down. Klopp hasn’t done well since gracing the Premiership with his hard metal brand of football. However, in Mo Salah, Sadiq Mane and Roberto Firmino, Liverpool has a fearsome attack. Since goals are what determines the difference between winning and losing, they are in good stead to have a decent run.

But how good they are this season will depend largely on the little Egyptian duplicating his form of last season. Additionally, Klopp have added and strengthened in their areas if weakness. In Allison, they have one of the best goalkeepers in world football. Fabinho and Keita in central midfield will make them difficult to beat. It is indeed a squad that will push for the title. How hard they will sustain this push will depend on such factors as determination, injuries and the usual controversial poor refereeing decisions.

A team l loath makes up the other teams in the top four. But without prejudice, they remain a good team even though they have a manager who is loquacious and lacks the requisite man management skills to bring the best out of his team. They didn’t do too well in the transfer market and it is understandable; having gotten Sanchez in January, an acquisition which in my estimation they didn’t need.

How they set up this season will be dependent upon the whims and caprices of Mourinho whose public castigations of his players is expected to continue. Already, he has said the team is sub par and it wouldn’t be unexpected if the players don’t pull their weight.

At best, they will simply make up the top four numbers. At worst, they could easily fall out of the top four and Mourinho undoubtedly will get the sack in the even that that happens.

It’s primed to be an exciting season no doubt and l can’t wait for hostilities to resume.

Bring on the EPL!