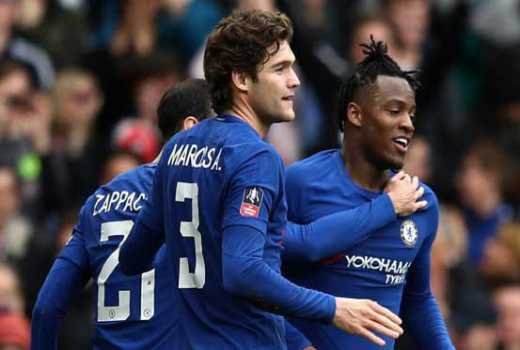 Chelsea welcomed Newcastle United to Stamford Bridge for an intriguing FA Cup encounter.  Antonio Conte lined up a strong squad for the cup tie having been defeated by Arsenal in the Carrabao Cup semis.

The first 30 minutes of the game swung in the favor of the away side as Chelsea found it difficult to dictate the pace of the game, but the blues took the lead in the 31st minute after sustaining pressure from the visitors. Batshuayi was back to his goal scoring form as he fires past the keeper with an assist from Marco Alonso. 1:0.

Man of the match Michy Batshuayi completed his brace at the stroke of half time as the Visitors were unable to hold their back line. The Belgian striker shot took a heavy deflection off Jamaal Lascelles to give Chelsea a comfortable lead going into the break. 2:0.

72’ Marcos Alonso scored his 7th goal of the season with a sublime trade mark free kick. 3:0