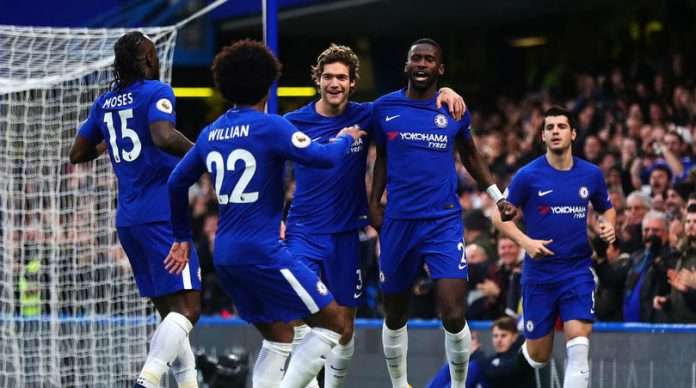 Chelsea ran riot on Stoke City at Stamford Bridge in the match of the day. The blues move from 3rd position to 2nd on the table after Manchester United were held to a goalless draw at Old Trafford.

German defender Rudiger’s 3rd minute header from close range opened the scoring for the home side, Rudiger connected with a superb cross from Willian which ended in the bottom left corner.

Daniel Drinkwater doubled the lead for Chelsea 6 minutes later, the midfielder was the first to react to a rebound from the edge of the box, his strike ended into the top right corner.

Pedro scored a superb goal in the 23rd minute to stretched the lead further to make it 3:0. Chelsea were awarded a penalty in the 73rd minute, Willian stepped up and showed composure as he smashes the ball straight into the goal 4:0.

Davide Zappacosta puts the nail on the coffin late in the 88th minute to make it 5:0. The Italian defender quickly reacted to a rebound from the edge of the box, he released a low shot into the bottom right corner to increase the misery of the away fans.