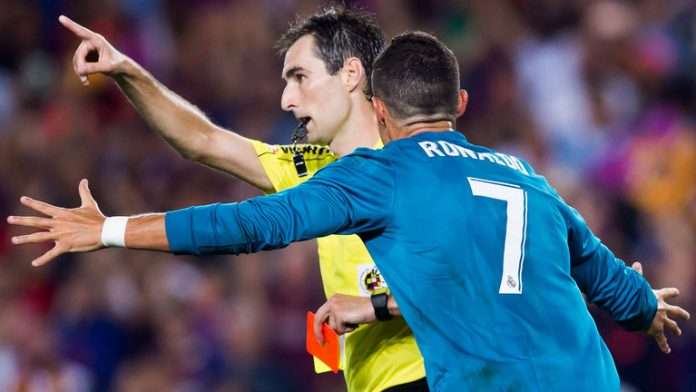 Ricardo De Burgos Bengoetxea who was the man in charge of the 1st leg of the Spannish super cup ruled that Ronaldo had tried to win a penalty when challenged by Samuel Umtiti.
Ronaldo seemed to have pushed the referee after he decided to send off the Madrid-star. Zidane the Real Madrid boss branded the decision as ludicrous.
According to the boss he said that he is annoyed that Cristiano Ronaldo was sent off, it might not have been a penalty, but still, giving him a card is ludicrous.
The Spanish football federation has now handed Ronaldo a five-match ban – one for two yellow cards booking and another four for pushing the official.
Real Madrid will appeal the decision, but if the decision doesn’t favor Madrid, the 32-year-old’s ban will begin his 5 match ban by missing the Super Cup second leg at the Santiago Bernabue.