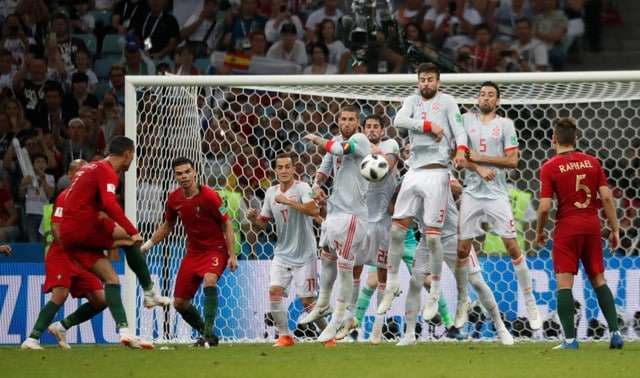 World best player Christiano Ronaldo scores a Hat-trick in an intriguing encounter against fierce rivals Spain at the Fisht Olympic Stadium in Sochi.

12′ Ronaldo opened the scoring from the spot kick early in the game after Nacho gave away the penalty kick. 1:0

24’Spain restored parity to the encounter with a wonder goal from “Power House” Diego Costa. Costa showed his strength, composure as he maneuvers past a the Spanish defenders before releasing a powerful low shot past the keeper. 1:1

44′ Portugal took the lead for the second time in the game as they capitalized on goal keeper error from David De Gea. The Manchester United No 1 was unable to make a simple catch from Christiano Ronaldo’s weak shot. 2:1

55′ Spain were back in level terms for the second time with a well constructed goal. Sergio Busquets raised high to head the ball back into the danger zone as Diego Costa shows great determination to bury the ball into the back of the net from close range. 2:2

58′ Spain took the lead for the first time with a superb goal from Nacho. The ball falls perfectly into the path of Nacho who makes up for his error with a volley from the edge of the box, the ball ricochets off the left post into the back of the net. What an effort! 3:2

88′ Gerard Pique gives away a silly free kick for a challenge on Ronaldo on the edge of the box. Ronaldo’s Wonderful and unstoppable free kick curled over the wall into the top right corner. Brilliant Technique!