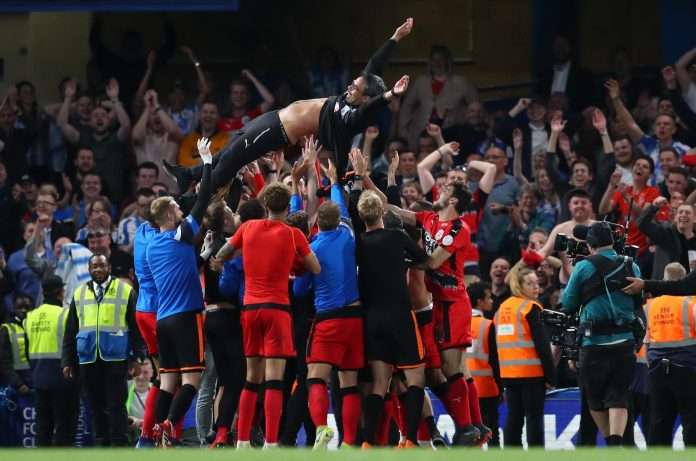 Manchester City beat Brighton 3-1 at the Etihad as they encrypt their name in the record book for a highly prolific season.

Pep Guardiola’s Manchester City broke the Premier League goal scoring record for a season having scored 105 goals. They also broke the record of the highest points for a particular season which was held by Chelsea as they reached 97 points with a game left.

16′ Danilo opened the scoring for the home side with an attempt from inside the box into the bottom left corner. 1:0

20′ Leonardo Ulloa leveled the game with a powerful header from inside the box into the roof of the net after he connected from a cross from Davy Propper. 1:1

34′ Bernardo Silva latched on to a precise pass from Leroy Sane inside the box as he restores the lead for the Cityzens. His first time effort was clinical as it drives into the bottom right corner off his favorite left foot. 2:1

72′ Fernandinho puts the icing on the cake with a superb first time finish from inside the box into the bottom left corner. 3:1

Chelsea were held to a disappointing 1-1 draw at Stamford Bridge by Huddersfield. The result puts a dent on their hopes of qualifying for the Champions League as Tottenham beat Newcastle 1 nil. However, the result favored the away side who secured their safety in the Premier League for another year.

50′ Laurent Depoitre opened the scoring for the home side after a goalless first half. 0:1

62′ Marcos Alonso leveled the game with terrific header but his goal was not enough for the blues as Huddersfield showed determination to earn a point. 1:1

Tottenham Hotspur were able to grind out maximum points against a well organized Newcastle side as they tighten their grip on a top 4 finish.

Harry Kane scored the only goal of the game in the 50 minute after he was perfectly released by Heung-Min Son. Harry Kane showed great composure inside the box as he slots the ball into the top right corner. 1:0

Arsene Wenger tasted his first defeat to Leicester in his 22 years reign in charge of the North London outfit as they were defeated 3-1.

15′ Diabate tees-up Kelechi inside the box with a perfect pass, Kelechi made up for his absence dues to injury to open the scoring for the foxes. 1:0

16′ A minute after the opening goal, Arsenal were reduced to 10 men as the referee showed a straight red card to

Miles showed strength and determination to cross the ball to Aubumeyang who leveled the game with a rebound into the roof of the net after his first attempt was spilled by the keeper. 1:1

Leicester were awarded a penalty for a reckless tackle by Mikhytarian on Winger Gray inside the box.

Jamie Vardy steps up and blasts an unstoppable spot kick into the top right corner. What a strike! 2:1

Riyad Mahrez puts the nail to the coffin as he produced a brilliant solo run into the box, he cuts back to beat the defender then buries the ball into the bottom left corner off his favorite left foot. 3:1