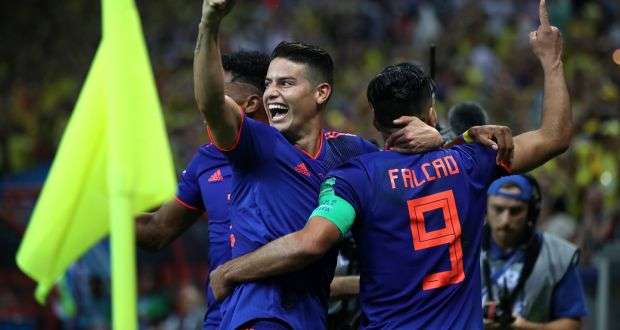 2014 quarter finalist Colombia were in electric form at the Kazan Arena as they humbled Poland 3 nil after a disappointing opening loss against Japan.

40′ Barcelona defender Yerry Mina broke the dead lock with an unstoppable header into the middle of the goal sublime cross from James Rodriguez. 1:0

70′ Radamel Falcao scored his first ever goal in the World cup with wonderful side footed finish as he latched on to a superb defense-splitting through ball from Juan Quintero. 2:0

75′ Juan Cuadrado puts the icing on the cake for Colombia with a superb finishing from a swift counter attacking display from the South Americans.

As it stands Poland will not make it through to the next round after losing two straight matches. Still there is much to be expected from Group H as Japan and Senegal are level on 4 points each.