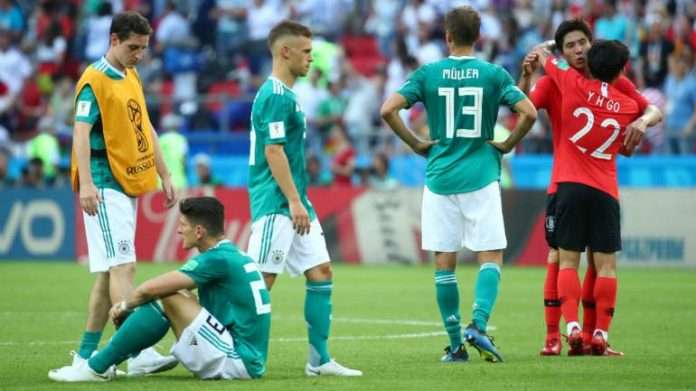 Today marked a great upset in world football as Germany crashed out from Russia 2018 in the group stages in an encounter filled with late drama at the Kazan Arena.

The Germans were unable to find the back of the net after series cut-clear chances. However, it was the South Koreans who broke the deadlock after 90 mins of football.

90+3′ Kim Young-Gwon was in the right place as the ball fell to his path deep inside the box. He makes no mistake as he smashes the ball into the roof of the net. 0:1

The Germans were in search of a late equalizer and goal keeper Manuel Neuer pushed forward. Unfortunately, the Koreans regained possession and Ju Se-Jong played a long ball to the German goal. Tottenham Hotspur winger Son Heung-Min showed determination as he chased down the ball and buried it into an empty net. 0:2

Despite the win from South Korea they fail to qualify from the group stage, what an irony.