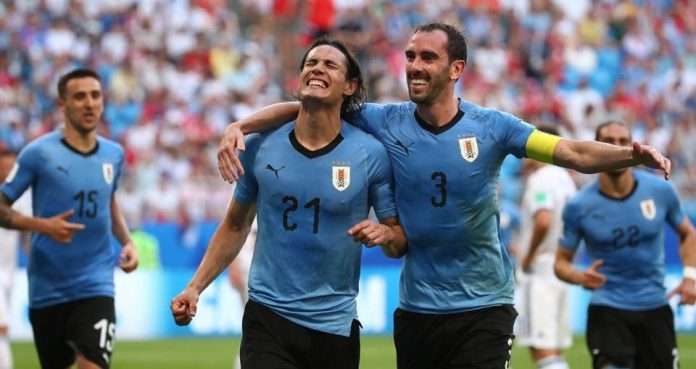 PSG “Hit Man” Edison Cavani was in the form of his life as he scored twice for his team to beat Portugal 2-1 in the round of 16 match at the Fisht Olympic Stadium Sochi.

Early in the 7th minute, Cavani opened the scoring for Uruguay with glorious finish from close range after he was teed up by Luiz Suarez.

55′ Pepe drew the game level with a whooping header deep inside the box courtesy of a well taken corner kick from the Portuguese. Game on! 1:1

62’ Cavani’s moment of brilliance won the game for Uruguay with a magnificent finish. The striker receives a pass and from the edge of the box, his first touch is a shot hit with finesse into the far right corner. What a strike! 2:1

What a memorable day in World cup history as Lionel Messi and Christiano Ronaldo are eliminated on the same day.

Uruguay progress into the quarter finals for the first time since 2010 and will face France who beat Argentina 4-3 in the first round of 16 matches.