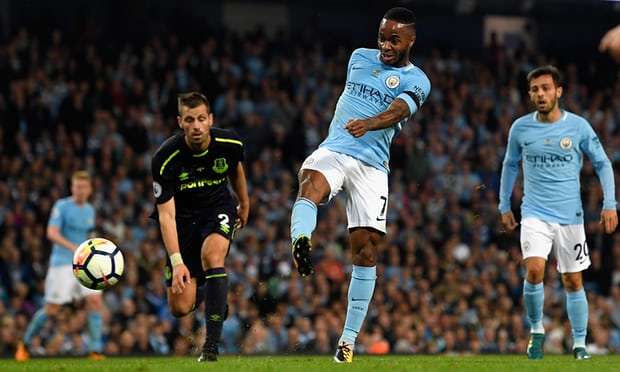 Everton took the lead in first half when Wayne Rooney tapped in a Calvert-Lewin’s low cross, making it two in two for the Former Manchester United Striker. That was Rooney’s 200th Premier League goal, whose 50th and 150th of such strikes also came against City.

Summer signing Kyle Walker was sent off 3 minutes to the end of first half, after receiving his second yellow card for a controversial elbow on Dominic Calvert.

Pep’s men were leveled 8 minutes to stoppage time when Sterling fist time shot found the back of the net after a poor clearance from Holgate.

2 Minutes to stoppage time Morgan Schneiderlin was giving his matches order after receiving his second yellow card for a very controversial tackle on Sergio Aguero, but replay reveals he got most of the ball and cought the City striker on the follow through.

It ended all squared as Everton got a vital point against Guardiola’s men.

On the sending off of Kyle Walker, Ronald Koeman admits that after consulting with Pep Guardiola, he believes the second yellow card was not a bookable offense.