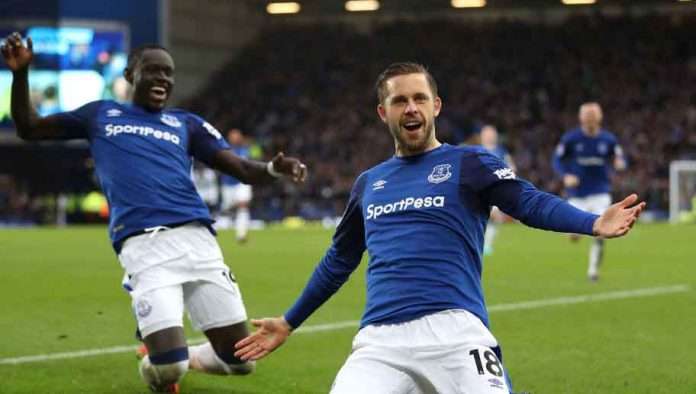 Everton Beat Crystal Palace 3-1 at Goodison Park in a battle for survival in the Premier League. Few chances were created in the first 45 minutes which ended goalless.

A minute into the second half and the deadlock was broken as Sigurdsson gave the home team the lead from a deflected shot from the edge of the box. 1:0.

51′ Oumar Niasse doubled the lead for the home side with a flying header into the bottom left corner from a perfect cross from Martina. 2:0.

75′ A third goal from Everton guaranteed the home team maximum points at home. Tom Davies was quick to react to a rebound after the ball breaks to him as he fires into the middle of the net. 3:0.

83′ Crystal Palace were handed a penalty kick as Ashley Williams probably handled the ball inside the penalty area. Luka Milivojevic stepped up and converts the spot kick but it was more of a consolation as the game ended 3:1 in favor of the home team. 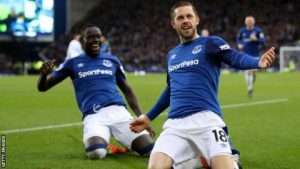 Stoke City played out a 1-1 draw at the BET365 stadium in a relegation battle.

32′ The away side opened the scoring Jose Izquierdo with a first time precise effort that sails into the bottom right corner 0:1.

68′ Xherdan Shaqiri levelled the game after a great team effort that ends with a precise shot into the bottom left corner. 1:1. 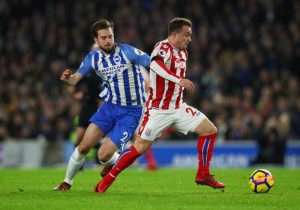 Swansea beat Burnley by a single goal in a very tight encounter. The first half ended goalless but late in the game Swansea broke the deadlock.

81′ Kyle Naughton finds Sung-Yong Ki on the edge of the box whose superb efforts finds the bottom left corner. 1:0 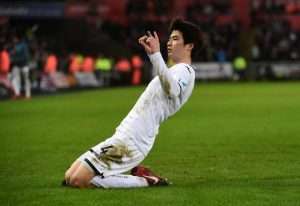 38′ Chicharito opened the scoring for the home side as he leaped very high to bury a header into the right side of the post that leaves the goal keeper stranded. 1:0.

78′ Marko Arnautovic doubled the lead for the home side as he was the sharpest to react to a rebound from inside the box. He strikes the ball into an empty net to seal the win for the Hammers. 2:0. 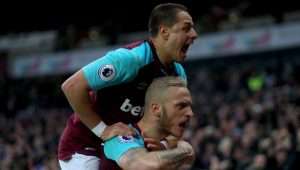 Manchester City hosted Leicester city at the Etihad in a very interesting encounter in the last fixture of the day.

3′ Early in the game, Kelvin De Bruyne pin point cross into the box finds an outstreched Raheem Sterling who opened the scoring for the home side. 1:0.

24′ Jamie Vardy levelled the game with an excellent shot from the edge of the box that lands in the bottom left corner leaving the goal keeper stranded. 1:1.

48′ Kelvin De bruyne once again turns provider as he finds Sergio Aguero who taps into an empty net to restore the lead for the home side.

53′ Kelvin De Bruyne recorded his 3rd assist of the game as he squares it to Sergio Aguero who beats the goal keeper onto the bottom right corner. 3:1.

77′ Aguero completes his Hat-trick as he feeds off from a goal keeper error. Kasper Schmeichel pass was intercepted by the striker who chips the ball past the goal keeper. 4:1

90′ Aguero scored his 4th goal of night as he once again intercepts a pass from the Leicester half. He unleashes a thunderous strike that ricochets off the croos bar, what a goal! 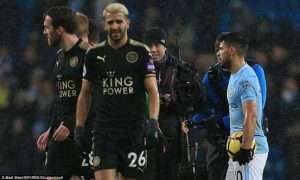