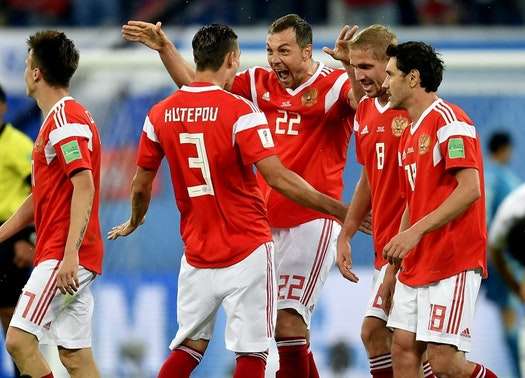 Russia became the first team to qualify for the next round of the competition with 8 goals from two matches as they eased past the Pharaohs of Egypt 3-1. Mean while, the result means that the Egyptians are eliminated from the competition after two losses.

Two minutes into the second half and Egypt were a goal behind through an Ahmed Fathy’s own goal. The skipper was unfortunate as his poor clearance found its way into his own net.

59′ Russia star man Denis Cheryshev was in a great position deep inside the box as he taps in from close range. 2-0

62′ Striker Artem Dzyuba put the nail on the coffin with a beautiful crafted goal. He controls a long ball into the box with his chest, he nutmegs the defender before placing the ball past the goal keeper into the right side of the goal.3-0

73′ Egypt were awarded a penalty by the referee after VAR confirmation on whether Mohamed Salah was actually fouled in the box. Salah steps up and his effort is unstoppable into the top right corner. 1-3

His goal proved to be consolation as Russia run away with a commanding lead with a fantastic crowd behind them.