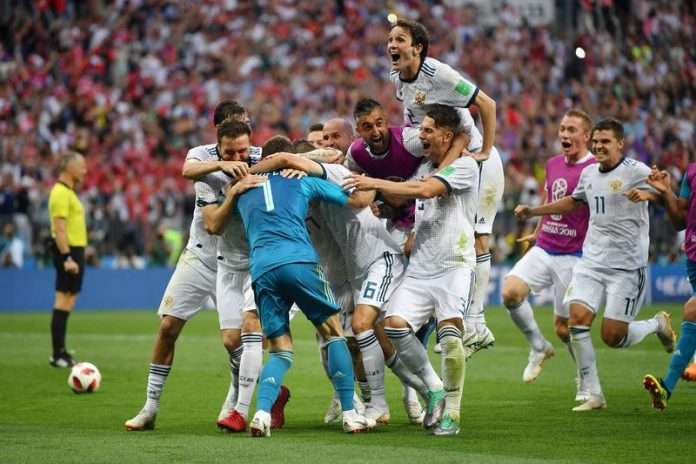 2018 World cup host Russia eliminates 2010 World Cup winners Spain in the round of 16 at the Luzhniki Arena in Moscow.

A highly motivated Russian team held Spain level for 120 minutes in a 1-1 draw. Twelve minutes own goal from Ignashevich gave Spain a flying start coming into the contest.

41′ Russia were awarded a penalty kick as Gerrad Pique handled the ball in his penalty box. Artem Dzyuba takes responsibility of the spot kick and his effort is precise and unstoppable past De Gea. 1:1

Russia were compact and were very disciplined defensively as they were able to hold off Spain’s possessive Tiki Taka pattern. 1-1 stalemate at the end of 120 minutes and the contest had to be settled with penalties.

Veteran Russian goal keeper Akinkeev was the man of the moment as he saved two penalties. He saved Koke’s kick then he pulled off a historic save with an outstretched leg to deny Iago Aspas.

4-3 it ended after penalty kicks and Russia advances to the quarter finals in Sochi and will square off against the winner of tonight’s game between Croatia and Denmark.