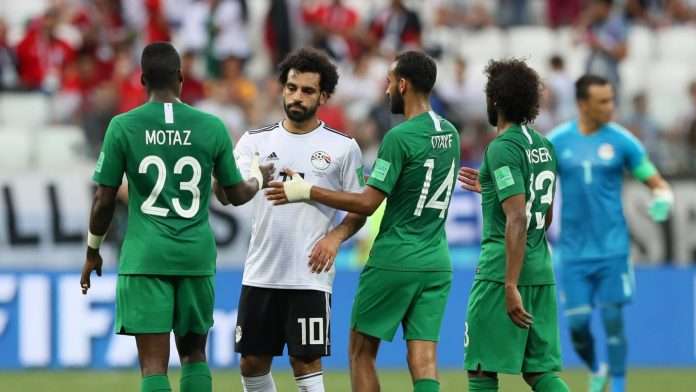 Saudi Arabia came from a goal down to defeat Egypt in their final game in Russia 2018 World cup at Volgograd Arena.

Both teams already confirmed their exit in the tournament but will play for national pride.

22′ Mohamed Salah opened the scoring for the Pharaohs with a lovely lob finish into an empty net. 1:0

43′ Saudi Arabia were awarded a penalty kick for a hand ball by Fathi inside the box. Fahad Mosaed Al Muwallad Al Harbi stepped up but was denied by wonderful safe from 45 years old El Hadary.

46+6 Another penalty is awarded to Saudi Arabia, Salman Al Faraj steps up and his effort is unstoppable into the left side. 1:1

90+6 Saudi Arabia won the game late in the game after a great team display. Salem Al Dawsari crowned their effort with well taken shot into the bottom right corner to give them a memorable victory. 2:1