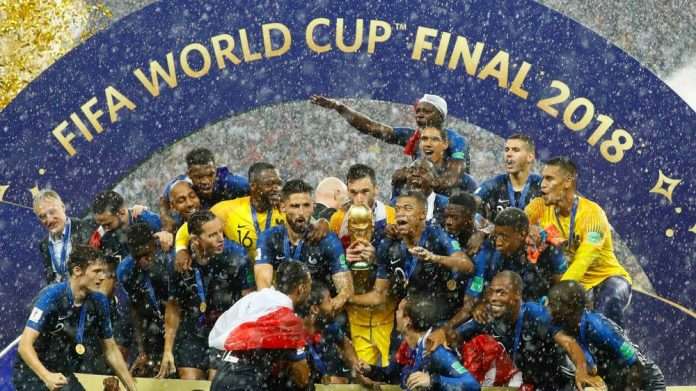 France beat Croatia 4:2 in the World cup finals in Moscow exactly 20 years after their 1998 heroics.

18′ France were ahead through an unfortunate own goal by Mario Mandzukic. He tried to defend a free kick with his head but the ball ended in the back of his own net.

28′ Ivan  Perisic restored parity to the contest with a well taken effort from the edge of the box into the right side.  1-1

A controversial moment in World history as France was awarded a penalty kick after VAR consultation.

38′ Antoine Greizeman steps up and sends the keeper in the opposite direction. What an effort I to the bottom left corner. 2:1

59′ Paul Pogba opened his world cup campaign with a wonderful left foot finish into the left side of the goal. 3-1

65′ Goal! A wonderful effort from Kylian Mbappe, his shot from outside the box is precise and drives into the bottom left corner.

69′ A gift of a goal for Croatia as Mario Mandzukic redeems himself after he capitalized on a goal keeper error from Hugo Illoris.

Didier Deschamps makes history as he wins the World Cup trophy both as a player and a coach as he leads a terrific French team to victory.

An exciting tournament comes to an end, big thanks to the host Russia for such wonderful moments