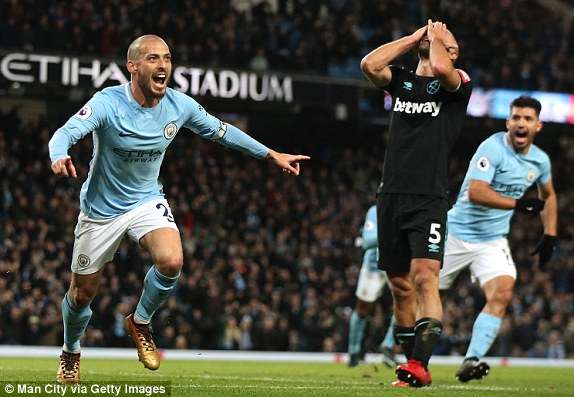 Pep Guardiola’s Manchester City side hosted a David Moyes relegation threatened West Ham side to the Etihad for the final game of the weekend.

The Hammers were off to a flying start when Italian defender Ogbonna opened the scoring just at the stroke of the half time whistle. West Ham showed a lot of discipline under new manager David Moyes as they went into the second half with a narrow lead.

Nicolas Otamendi leveled the game for City in the 57th minute,the Argentine defender was the quickest to react to a Gabriel Jesus low driven cross from inside the 18 yard box.

The highlight of the game occurred seven minutes before the end of regulation time. Belgian play-maker De Bruyne drove a sumptuous cross to Manchester city captain David Silva whose half volley found the back of the net to restore Manchester City 8 points advantage at the top of the Premiership table.