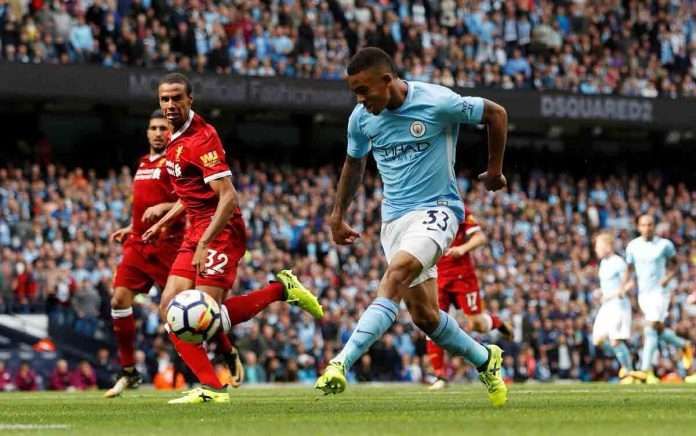 The first game after the International break was an exciting one as Manchester City defeats Liverpool 5-0 at the Eithad.

Sergio Augero opened the scoring in the 24th Minute when Kevin De Bruyne through ball sent him clear as he rounded Liverpool’s goalkeeper Simon Mignolet to become the top leading non-European goal scorer in the Premier League.

Sadio Mane was shown a straight red card after his foot caught Manchester City’s goalkeeper Ederson Moraes while chasing an over the top ball. The goalkeeper was stretchered off and replaced by Claudio Bravo.

Gabriel Jesus got on the score sheet as he powered home a cross from De Bruyne to give the citizens a 2 goals lead before the break.

Jurgen Klopp made a defensive change at the break when he brought on Oxlade Chamberlain for Salah, but city grabbed the lead in the 54th minutes when Fernandinho through ball found Augero who unselfishly setup Gabriel Jesus to get his brace.

Leroy Sane who came on for Gabriel Jesus in the 57th minute registered his name of the score sheet 20 minutes later. He got his brace in the 90th minute when his curled strike found the back of the net to give the Citizen a well deserved 5-0 victory of Liverpool.

City’s next match will be away to Feyenoord in the Champions League on the 13 the of September.