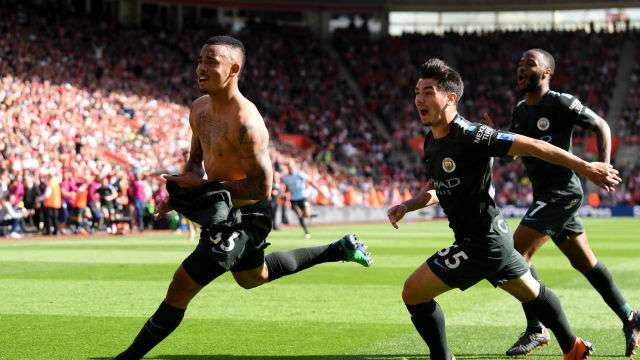 Bournemouth showed great character as they were able to overturn a 38 minute Ashley Westwood deflected goal.

74′ Joshua King levels the game for the Cherries as he smashes the ball into the top right corner from close range. 1:1

90+3 Callum Wilson grabs the winner late in extra time with an effort from close range into the bottom right corner, Jermain Defoe provides the assist. 1:2

Burnley accepts defeat at home but qualify for the Europa League having finished in 7th postion with 54 points.

Second half goals from Wilfried Zaha(70) and Patrick van Aanholt (78) was enough to put the nail in the coffin as West Brom are relegated.

Palace finish the season in the 11th position with 44 points.

Arsene Wenger’s last game for the Gunners after 22 years in charge of the North London club ends with a narrow 1 nil win.

38′ Aaron Ramsey tees up Record signing Pierre-Emerick Aubameyang who scores a poacher’s goal from close range with a sliding effort into an empty net. 0:1

Liverpool trashed Brighton 4 nil as they cement their place in the top four.

26′ Magnificent Salah seals his golden boot award with 32 goals. He opens the scoring for the Reds with a trade mark left footed finish from inside the box. 1:0

40′ Dejan Lovren doubled the lead for the home side with a powerful and unstoppable header from close range as he connects to a cross from Andrew Robertson. 2:0

Dominic Solanke(53) and Andrew Robertson(85) were also on target as Liverpool cruised to a comfortable victory ahead of the Grand Final against Real Madrid in the Champions League final.

Great season for Liverpool as they end the season on 4th position with 75 points.

Manchester United were able to grind out a narrow 1 nil win against resilient Watford team.

38′ Veteran Michael Carrick showed great vision to pick up Juan Mata who broke the offside trap to be one on one with Goal keeper Gomez, Mata unselfishly picks up Marcus Rashford who coolly slots the ball into an empty net. 1:0

85′ Micheal Carrick was substituted for Paul Pogba was given a thunderous ovation as he plays his last professional match.

Manchester United end the season in 2nd place with 81 points, 19 points behind city rivals. Jose Mourinho still has a chance to grab a trophy with the FA Cup Against his former team Chelsea at the weekend.

Newcastle provided the greatest surprise in the final round of the season as they trash Chelsea 3 nil at St James Park.

Goals from Dwight Gayle(23), and a double from Ayoze Perez(59,63) were enough to knock Chelsea out of the top four.

Newcastle finishes in a top 10 position for the first time in 4 years with 44 points. Meanwhile, Chelsea qualifies for the Europa League as they finish in 5th position with 70 points, 5 points behind Liverpool.

90+4 Gabriel Jesus grabs a late dramatic winner for the Cityzens as they become the first team in the history of the Premier League to reach a century of points.

Pep Guardiola’s Champions were remarkable this season as they smashed records upon records in an unforgettable season filled with thrills, excitement and lots of goals.

However, despite losing the game Southampton secure their safety as they sit just on top of the relegation zone with 36 points, 3 points above the relegated Swans.

Swansea confirmed their relegation as they taste defeat against already relegated Stoke City.

Andy King opened the scoring for the Swans early in the 14 minute but Stoke city leveled the game through Papa Ndiaye(31) with a lofted finish into an empty net.

Peter Crouch grabbed the winner for the away side with a trade mark header inside the six yard box into the middle for the goal. 1:2

In a very entertaining encounter at Wembly, Tottenham played out a 9 goals thriller against Leicester

4′ Jamie Vardy opened the scoring for the foxes with a brilliant header into the bottom right corner after being released by a curled free kick from Riyad Mahrez. 0:1

7′ Harry Kane leveled the game after slipping past the Foxes defense. He slams the ball into the bottom left corner leaving the keeper helpless. 1:1

16′ Riyad Mahrez rebounded goal gave the away side a 1:2 win going into the break.

47′ Two minutes into the 2nd half, Kelechi Iheanacho released a stunning shot from just outside the box into the top right corner. Great effort! 1:3

49′ A quick response from Spurs as Erik Lamela finds himself one-on-one with the goal keeper, he makes no mistake and shows composure to bury the ball into the back of the net 2:3

53′ Disappointment for the Foxes as Christian Fuchs deflects the ball into his own net. Own goal! 3:3

60′ Tottenham were ahead for the first time in the game as Erik Lamela effort drives into bottom left corner. Great team work! 4:3

73′ Jamie Vardy restored parity in a mouth watering encounter as his smashes the ball into roof of the net. Unstoppable effort 4:4

76′ Harry Kane grabbed the winner with a magnificent effort from mid range which ends up in the back of the net. What an effort! 5:4

Tottenham finish the season in 3rd position with 77 point, 2 points above Liverpool. Meanwhile, Leicester finishes in 9th place with 47 points.

David Moyes beat his former team Everton for the first time since his departure with 3-1 win to keep the Hammers safe.

39′ Manuel Lanzini opened the scoring for the Hammers as he released a sledge hammer shot into the bottom right corner. 1:0

63′ Marko Arnautovic Soars through opponents before releasing a rocket of a shot from the edge of the box into the middle of the net 2:0

75′ Oumar Niasse pulled one back for Everton with a rebounded goal to give them hope for a possible comeback. 2:1

82′ Manuel Lanzini completed his brace for the night as he scores a similar goal but this time his effort ricochets off the post into the top right corner. 3:1