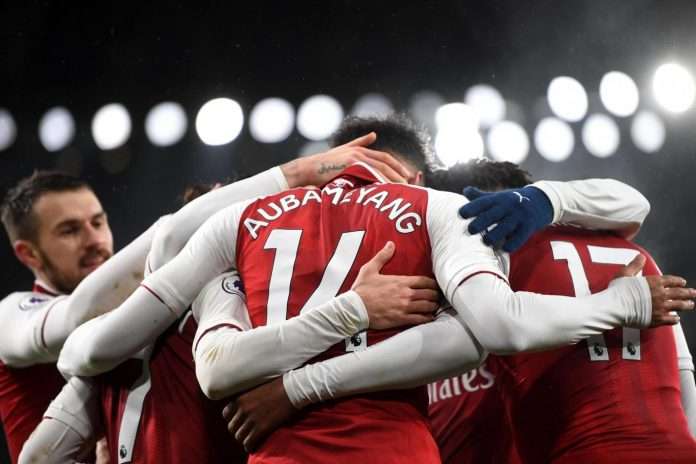 A resilience Burnley team held run away leaders Manchester City to a one all draw at Turf Moor.

22’ Bernando Silva precise pass finds Danilo on the edge of the box, he spots the keeper off his line and strikes the ball to the top right corner of the goal. 0:1.

82’ Burnley drew the game level with a stunning shot into the middle of the post by Johann Gudmundsson after picture perfect pass from Mathew Lowton. 1:1. 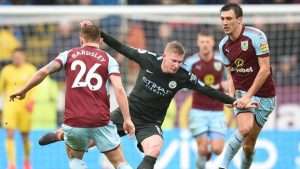 Bournemouth  came from a goal down to beat Stoke city 2-1.

5’ Papa Ndiaye technical lofted cross was met by Xherdan Shaqiri who opened the scoring for the away side with a header into the right post 0:1.

70’ Stoke City were punished after a defensive error which presented a goal scoring opportunity to a lurking Joshua King who showed great composure to convert from close range 1:1.

79’ Bournemouth  took the lead for the first time in the game after a superb Jordan Ibe set piece was met by Lys Mousset whose slight header went in between the legs of the stoke goal keeper. What a remarkable comeback! 2:1. 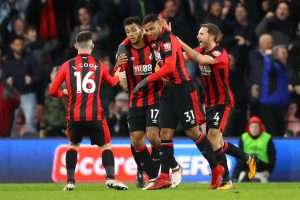 The Seagulls beat the Hammers 3-1 in very interesting League encounter.

8’ Glen Murray opened the scoring for the home side as he was the quickest to react to a loose ball inside the box. His well taken shot into the bottom right corner beats the goal keeper, 1:0.

30’ West ham were back in the contest after a brilliant solo effort from Chicarito. The Mexican forward strike from inside the box into the top right corner couldn’t be saved by Mathew Ryan. 1:1.

59’ Jose Izquierdo puts the home side back in the lead as he quickly reacted to a rebound from  the edge of the box, he releases a shot into the top right corner. 2:1.

Pascal Gross rounded up the scoring as he connects to a defense splitting through ball . His shot hits the left post to leave the goal keeper completely stranded. 3:1. 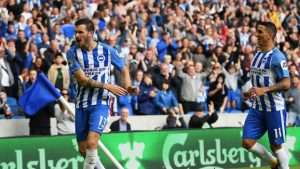 Leicester City were held to a 1-1 draw by Swansea at the King Power Stadium.

17’ Leicester City opened the scoring after a brilliant effort from Kelechi Iheanacho who finds Jamie Vardy with a square pass, The England International striker showed great composure as his shot beats Lukasz Fabianski into the bottom right corner 1:0.

53’ Swansea drew the game level with a powerful header from Federico Fernandez into the top right corner of the goal. 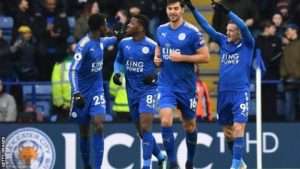 Manchester United beat Huddersfield 2 nil at Old Trafford to keep their hopes high for a top four Finnish in the Premier League. The first half ended goalless as both teams failed to find the back of the net in a very tight first 45 minutes.

55’ Juan Mata turned provider for Romelu Lukaku inside the box who was left unmarked. The Belgian forward strike ended at the bottom left corner to record his 19th goal of the season in all competitions for the Reds. 1:0.

68’ Manchester United were awarded a penalty kick after a reckless challenge by Michael Hefele on Alexis Sanchez inside the box. The Chilean took responsibility of the spot kick but the keeper guessed the right way. Sanchez was quick to react to the safe as he hit a rebound with his left to score his first goal in his Old Trafford debut. Final score at Old Trafford; Manchester United 2 – 0 Huddersfield 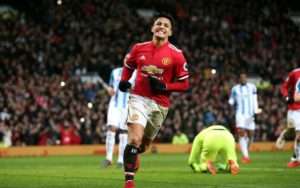 Southampton come from a goal down away from home to beat West Brom 2-3 in a relegation battle in the bottom of the table.

4’ Ahmed Hegazy opened the scoring for the home side with a powerful  header into the roof of the net and leaves the goal keeper stranded. 1:0.

40’ Mario Lemina produces an absolute screamer!. The midfielder unleashes a rocket from a distance and the ball flies into the top left corner of the goal as Ben Foster shakes his head in disbelief. 1:1.

43’ Southampton were in the lead for the first time in the game with a goal from Jack Stephens. The defender out jumps the West Brom Defence  to connect to a corner kick with a great header that leaces the goal keeper with no chance. 1:2.

55’ James Ward Prowse doubled the lead for the away side with rocket free kick that ends in the bottom right corner. 1:3.

72’ Rondon pulled one back for the home side in an attempt for a comeback with close range header into the right side of the goal. 2:3. His goal proved to be a little too late as Southampton claimed maximum points away from home.

The Gunners hosted Everton at The Emirates Stadium in a very interesting encounter filled with fire works. New signing Aubameyang scored his first goal (controversial) in Arsenal’s shirt.Arsenal became the first team to score Everton 4 nil in the first half in Premier League History. First half goals from Ramsey(6),  Shkodran Musta (14), Aaron Ramsey (19), Pierre-Emerick Aubameyang (37) as the Gunners already sealed their win before the half time break.

64’ Dominic Calvert-Lewin scored a consolation goal for Everton with well timed header after a precise cross. 4-1.

Aaron Ramsey puts the nail on the coffin with a first time shot from the edge of the box that ended up in the bottom right corner. What a great game, final score 5:1. 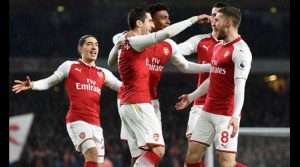