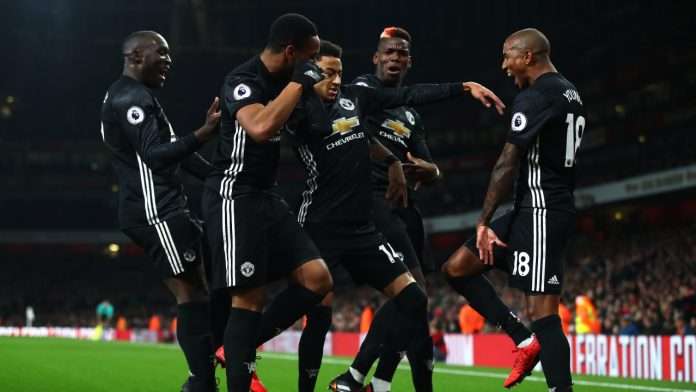 Arsenal hosted Manchester United at the Emirates in a crunchy derby between two rivals. Coming into the game, both coaches also have a long term rivalry between each other. Wenger will have to overcome his dreadful head-to head statistic against Mourinho as the French man has won just one of 15 matches against Jose Mourinho.

The game promised to be an entertaining encounter and Manchester United were off to a flying start with a 4th minute Antonio Valencia close range shot which went through Peter Cech’s legs. Jesse Lingard doubled the lead for the Reds in the 11th minute after some entertaining display of passes from Jose Mourinho’s side.

The second half swung in the favor of the home side as they pilled up much pressure on United. Lacazette pulled one back at the 49th minute with a fine assist from Aaron Ramsey. Jesse Lingard killed any hopes of a possible comeback with a simple tapping into an empty net after a fine assist from Paul Pogba to make it 3-1 in favor of the Reds.

Arsenal were gifted another opportunity for a possible comeback in the 74th minute as Paul Pogba was shown a straight red card by Referee Marriner for stumping on Hector Bellerin. Manchester United Goal Keeper David De Gea was handed the Man Of The Match after a series of world class saves including a classic double save to deny Lacazette and Sanchez. After the match, Mourinho branded De Gea as the best Goal keeper in the world after the Spaniard pulled off a total of 14 saves in a single match.

Manchester United beat Arsenal 3-1 at the Emirate, the result means that Arsenal slipped to 5th position with 28 points, while Manchester United closed the gap between them and City rivals to 5 points with city having a game in hand