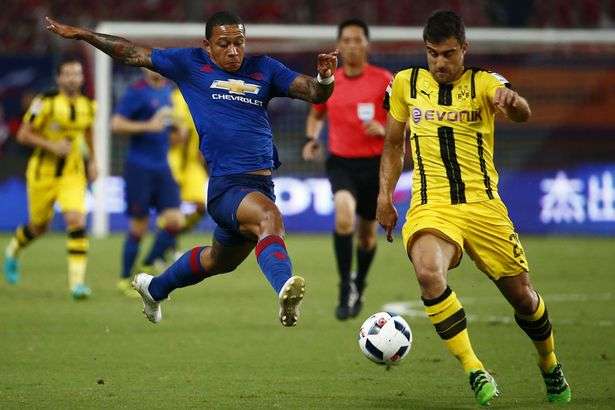 Manchester United’s plane was forced to make an emergency landing on its way to Beijing due to poor weather.

United began their pre-season tour of China with a 4-1 defeat to Borussia Dortmund in Shanghai and will now face Manchester City on Monday.

But United’s plans were unexpectedly disrupted after they were forced to make an early landing in Tianjin.

Standing outside the teams plane, Memphis Deplay released the below video on Facebook.

Depay Posted: Lost somewhere in China ☹️ and I still figure out what she was calling the this place where we stuck at the moment ‪#‎mood‬ Beijing here we go!

“We are lost somewhere, we had to make a quick landing somewhere,” Depay said in a video posted on his Facebook account.

“We tried to fly to Beijing but the weather is a little bit bad so we had to land somewhere else.

“So now we’re waiting until the weather gets a little bit easier so that we can land. I hope we can leave soon so that we can prepare ourselves for the game versus Manchester City.”