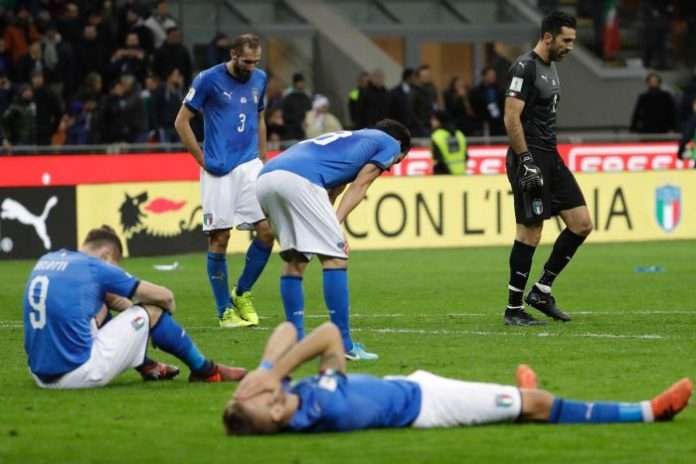 The Italian National team will not be joining to Russia 2018 after they played out a goalless draw against Sweden in the World Cup 2nd leg Play-Offs?(0-1 Aggregate).
The result means that Italy have failed to qualify for a World Cup tournament for the first time since 1958. Mean while, the Swede’s earn their first World Cup appearance since 2006.
The Azzurri’s dominated possession but were unable to beat the ever-present Swedish Goal Keeper Robin Olsen who pulled a couple of brilliant saves to to deny the home side a victory. After a 1 nil win at Stockholm the Swedes knew that a draw at the San Siro will guaranty them a ticket to Russia come 2018. The Swede’s executed and perfected a well defensive strategy with a very experienced back-line with Lustig, Granqvist and Manchester United defender Lindelof at the heart of the Swedish defense to help provide a well deserved clean shit or the Swede’s. There were alot of emotions after the final whistle with tears rolling down the cheeks of the Italian players. Experienced Italian players like Gianluigi Buffon, Giorgio Chiellini, Daniele De Rossi and Barzagli waved goodbye to the fans as they missed what seems like their last opportunity to participate in a World Cup as these players will be in their late 30’s come the next World Cup in 2020.