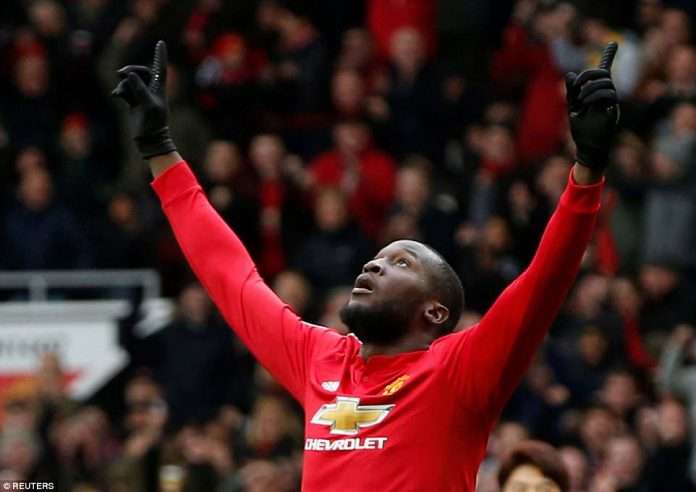 Liverpool came from a goal to beat Crystal Palace away from home as they search for a top 4 finish in the Premier League.

12′ The home side were in front early in the game as they were awarded a penalty for reckless challenge by Goal keeper Loris Karius on Zaha.

Skipper Luka Milivojevic stepped up and converted the spot kick as he sends the keeper the wrong way. 1:0.

49′ Sadio Mane pulled one back for Liverpool with a beautiful crafted goal. He beats his marker and strikes the ball into the bottom left corner/ 1:1.

84′ Top scored Mohamed Salah gave Liverpool a late winner to move them into second position temporarily. Andrew Robertson passes to Salah inside the box who shows great composure as he buries the ball into the back of the net. 1:2. What a game of football! 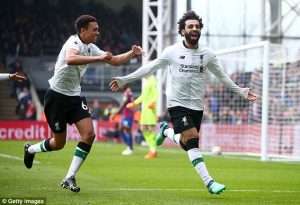 Brighton played host to Leicester City at the Amex Stadium. The first half ended goalless as both teams failed to find the back of net.

77′ Brighton were awarded a penalty kick for foul committed by Harry Maguire. Glenn Murray steps up to take the spot kick but fail to convert as Kasper Schmeichel  guesses the right way. 0:0.

83′ Leicester took the lead with as Benjamin Chilwell precise cross was met by Ibora who rises high to head the ball into the right side of the goal. 0:1.

90+6 Leicester doubled their lead late in added time with a goal from Jamie Vardy. Demarai Gray crosses the ball inside the box to an unmarked Vardy who had a simple tapping into the back of the net. 2:0. 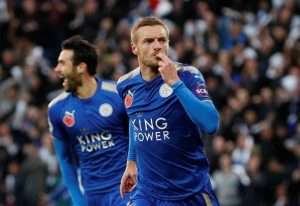 Manchester United beat Swansea 2 nil at Old Trafford as they secure their place in second position.

5′ Early in the game Romelu Lukaku opened the scoring for the home side as the Belgian scored his 100th premier league goal. Alexis Sanchez inside the box unselfishly finds Lukaku whose strike took a slight deflection into the top left corner of the goal. 1:0.

20′ Manchester United doubled their lead with a goal from Alexis Sanchez who scores his 2nd goal for the Red/s since his move from Arsenal. Lingard precise pass to Sanchez inside the box, the striker showed great composure as he buries the ball in the bottom right corner. 2:0.

The second half was barren as both sides came close to scoring but couldn’t find the back of the net. Final score Manchester United Swansea nil. 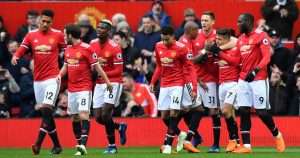 80′ Ayoze Perez lone goal was enough for the Rafa Benitez side as they move closer to securing their place in English top flight football. Kenedy unselfishly finds Ayoze Perez inside the box who shows composure as he buries the ball into the back of the net to give Newcastle a well needed win. 1:0. 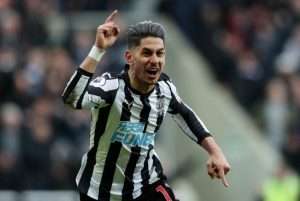 13′ Kiko opened the scoring for Watford from a Jose Holebas corner kick. Kiko pulls the trigger and score from inside the box in the left side of the post. 1:0.

42′ Bournemouth were awarded a penalty kick as Jose Holebas handled the ball inside the penalty area. Joshua King steps up and cooly converts the spot kick with a low strike into left side of the goal. 1:1.

49′ Watford took the lead for the second time in the game with a goal from Roberto Pereyra. Will Hughes passes to Pereyra who takes a first time shot into the bottom right corner. 2:1.

90+2′ Late drama in the game as Bournemouth pulled a goal back to earn point from the encounter. Ake headed the ball to an unmarked Jermain Dafoe inside the box who makes no mistake as he buries the ball into the back of the net. 2:2. 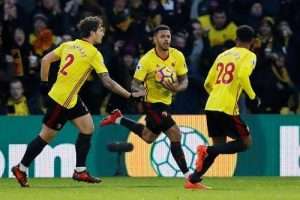 Burnley showed character away from home as they grabbed maximum points against West Brom.

22′ Great moment of football as Ashley Barnes scores a stunner which is worthy of the goal of the season. Aaron Lennon precise cross to Barnes who strikes the ball with a bicycle kick into the back of the net. 0:1. What a great goal!

73′ Chris Wood doubled the lead for Burnley with a rebound from his first headed effort. 0:2.

83′ Jose Rondon pulled one back for the home side with a powerful header the right side of the post but his brilliant goal was more of a consolation as Burnley claimed maximum points. 1:2. 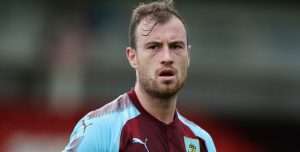 13′ Joao Mario opened the scoring for the home side with an absolute belter from the edge of the box. Terrific goal! 1:0.

17′ Marko Arnautovic doubled the lead for the home side with his second attempt an goal as the goal keeper pulled a superb safe. His strike goes into the roof of the net. Great strike from the Austrian. 2:0.

45+4 Marko Arnautovic completed his brace for the game as he connects to precise cross sending the ball into the back of the net. 3:0. 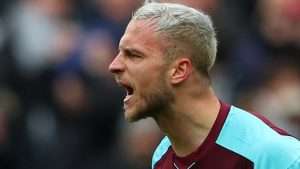 Manchester City once again prove to be the best in the land as they beat Everton 1-3 at Goodison park. Pep Guardiola side have beaten every Team in the English Premier League in their road to winning the League.

City buried the game in the first 45 minutes with with superb goals from Sane, Gabriel Jesus and Sterling .

4′ Sane opened the scoring for the away side as he smashed the ball with a superb first time superb volley into the back of the net with a sublime assist from David Silva. 0:1.

12′ An unmarked Gabriel Jesus doubled the lead for City with a superb header from De Bruyne Square played Cross into the box. 0:2.

37′ David Silva once again turned provider with a beautiful square pass into the box for Sterling who makes no mistake as he buries the ball into the back of the net 0:3.

The home team were booed off going into the break after a pitiful first half performance as they recorded 7% possession compared to Manchester City 93%.

63′ Bolasie pulled scored his first goal for over 17 months after his long spell out with injury. His low strike from inside the box hit both post before entering the goal leaving the goal keeper Ederson helpless. 1:3.

His goal was more of a consolation as Manchester City held on to their win. Pep Guardiola’s team now seek for 3 points before he wins his first Premier League title. What a great team performance! 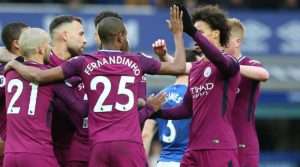