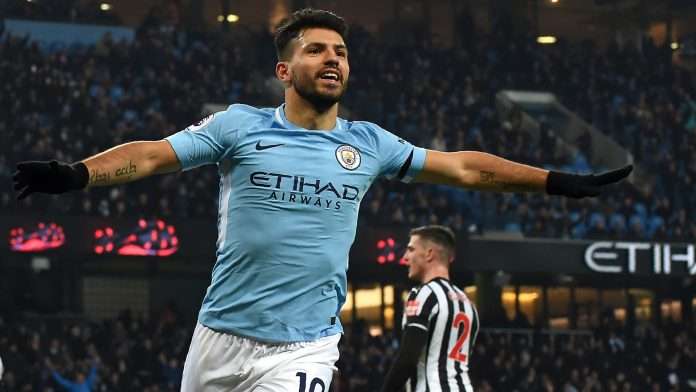 Chelsea Hammered Brighton 4 nil as they continue to pile up pressure on the title race. Man of the match Eden Hazard scored opened the scoring early in the 3rd minute from a rebound inside the box.
Willian doubled the the lead for Chelsea in the 6th minute with a cool finish from the edge of the box. In the 77th minute Hazard completed his brace with a wonderful individual brilliance to give the away side a commanding lead, 0-3.
In the final minute of regulation time, Victor Moses put the icing on the cake to make it 4 nil to Chelsea as they stroll to victory. 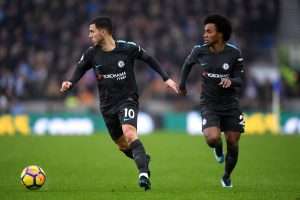 Arsenal were back in winning ways after their disappointing outing last week against Bournemouth. Arsenal became the first team to score four goals in the first half of a Premier League game this season. The Gunners were off to a blistering start scoring three goals in the first 13 minutes of the game. Monreal 6′, Iwobi 10′, Koscielny 13′.
Laccazette scored the fourth in the 22nd minute with a clinical one time finish after a string of p 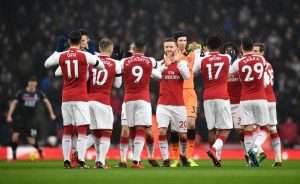 asses from the home side to give the Gunners a surprise lead going into the second half.
The home side were unable to continue with their perfect start to the game and the away side were able to cut the lead shut in the 78th minute by Milivojevic.
Final score at the Emirates, Arsenal 4 Crystal Palace 1.

Burnley welcome Manchester United to a though contest at Turf Moor. Burnley proofed to be a very compact team as they cut off play by the visitors as the first half ended goalless.
Manchester United started the second half with more purpose. 59′ Romelu Lukaku sublime pass to Anthony Martial broke the deadlock, his strike hits the top of the cross bar and into the net. Both sides tried to grab a winner after creating series of chances but the visitors were able to grab maximum points in a very difficult ground.
Final score, Burnley 0 Manchester United 1. 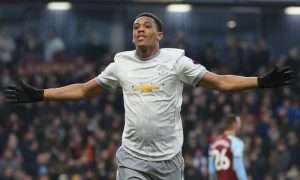 Everton welcomed West Brom to Goodison park in a crunchy encounter. J.Rodriguez opened the scoring in the 6th minute as he showed great composure after a sublime midfield pass from Krychowiak. 0:1. The away side grabbed a first half win as the home side continued to struggle.
Everton drew level in the 70th minute as new signing Theo Walcot turn provider for Niasse who fires home as the game ends in a stalemate. 1:1 it ends at Goodison Park. 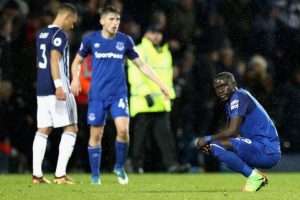 Welcome to the King Power Stadium as Leicester City played host to a struggling Watford side. Leicester City striker Vardy was fouled in the 18 yard and the home side were awarded a penalty in the 38th minute.
Vardy stepped up and took responsibility of the spot kick sending the goal keeper the wrong way with a powerful strike. 1:0. The away side were unable to get into the game as their struggles continue.
Late into the game, “Want-Away” winger Riyad Mahrez secured the win for the foxes with a beautiful solo effort. Final score at the King Power Stadium, Leicester City 2 Watford 0. 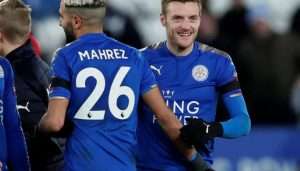 Paul Lambert kicked off his Stoke career against Huddersfield after the sacking of Mark Hughs. The first half ended goalless but the home side opened the scoring in the the 53rd minute. Maxim Choupo-Moting found Joe Allen inside the box who didn’t fail to find the back of the net. 1:0.
Mame Diouf doubled the lead in the 69th minute, the striker receives a through pass from mid range and fires a low shot. The ball glances off the left post into the back of the net to secure a much needed win for the new manager in his debut. Final score at the Bet365 stadium 2:0. 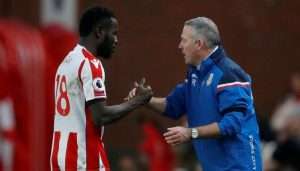 The Hammers welcomed the Cherries to the London stadium for a cracking encounter. The first half ended goalless as both team failed to find the back of the net.
71′ Fraser opened the scoring for Bournemouth as he fires the ball into the left post from inside the box. 0:1. Moments after the opening goal, Mexican striker Javier Hernandez pulled one back for the home side as the game ends in a stalemate at the London Stadium; West Ham 1 Bournemouth 1. 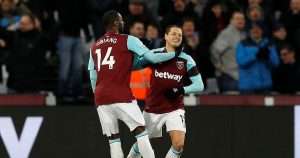 Manchester City welcomed Newcastle United to the Etihad for the last fixture of the day as the Cityzens intend to strech their lead untop of the League table.
Kun Aguero was the centre of attraction as the Argentine forward scrored a Hat-trick to send the “Noisy Neighbours” into a frenzy. Aguero opened the scoring in the 34th minute with the slightest touch off his head from a De Bruyne crossing. 1:0
62′ Sterling is fouled in the box and Aguero takes responsibility and smashes the ball past the goal keeper 2:0.

67′ Ciaran Clark through sublime through pass to Jacob Murphy broke him free into a one-on-one opportunity with city goal keeper Ederson, Murphy showed great composure as he simply chips the ball over him into the net. What a great goal! 2:1.

The Argentine completed his Hat-trick in the 83rd minute, Leroy Sane showed individula brilliance as he dazzled through the Newcastle defense before ffinding Aguerro with a perfect pitch pass. Aguero jinxed into his man as he fires a low shot into the left hand side of the post. 3:0
The win means that Pep Guardiola side are 12 points clear of their city rivals Manchester United. 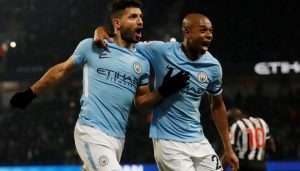