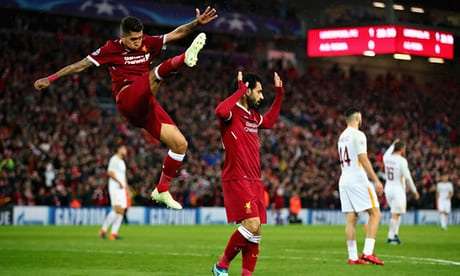 Liverpool hosted As Roma to Anfield for the first leg of the Champions League semi finals.

Premier League man of the moment Mohamed Salah scored two brilliant goals in the 1st half of the game in a very interesting encounter against his former club AS Roma.

The PFA’s Player of the Year scored twice (36′, 45+1′) in the 1st half to give the home side a commanding lead going into the break. The Egyptian grabbed his 43rd goal this season for Liverpool in all competitions. Salah opted to celebrate both goals as a sign of respect for the Italian side have played in Rome for 3 years before moving to Liverpool. 2:0

56’Mohamed Salah turned provider for Sadio Mane with a cheeky pass inside the box which he finished with a one-time shot into the bottom left corner. 3:0

61’Mohamed Salah was provider once more but this time for Firmino who had a simple tapping into an empty net. 4:0

69’Roberto Firmino completed his brace for the night with a brilliant header from a James Milner corner kick into the bottom left corner. The score is 5:0

81’Roma scored a vital away goal at Anfield with a beautiful finish from Edin Dzeko whose shot into the left corner left the goal keeper stranded. 5:1

84’Roma were handed a penalty for a handball by James Milner inside the box.

85’Diego Perotti takes responsibility of the spot kick as he cannoned the ball into the top right corner. Great kick! 5:2

Liverpool seem to be in control of the contest with a 5:2 win at Anfield with the next leg to be played in the Stadio Olimpico. Roma will be hoping for a repeat of their famous comeback against Barcelona in the quarter finals