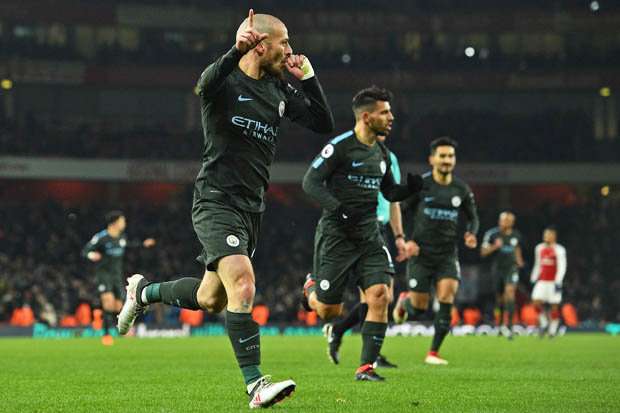 Arsenal face Manchester City in the Premier League after their shock 3 nil defeat to the “Sky Blues” in the Carabao’s Cup final at Wembly.

Arsenal’s coach Arsene Wenger who has been under heavy scrutiny recently at Arsenal after 20 seasons in the club was faced with the worst possible start ever as the host went in front in the first quarter of an hour.

17′ Manchester city opened the scoring after an individual brilliance from the young German who unselfishly passes the ball to Bernando Silva inside the box. The Spanish midfielder push the ball to his favorite left foot and showed accuracy as his finessed shot flew into the top right corner of the goal. 0:1.

28′ Manchester City doubled their advantage after a brilliant team effort from the away side. After a combination of passes from their ruthless strike force, Aguero finds David Silva with a precise pass inside the box, Silva showed great composure as he strikes the ball over Cech in the Arsenal Goal. What a wonderful goal! 0:2.

32′ The away team inflicted more damage for the home side as they conceded the the third goal, the second successive goal in 5 minutes. For the first time ever in the history of the Premier League, Arsenal conceded three first half goals.

Manchester city in-form winger Leroy Sane was gifted with a goal for his team effort with a lucky goal. His first “poor” touch ricochets off Arsenal’s defender Hector into the bottom left corner of the goal.

As the referee signaled the the end of the first half, the Emirates stadium was loud with boos from the disappointed home fans as they away side run away with a comfortable first half win!.

52′ Arsenal were gifted with an opportunity of a possible comeback as they were awarded a penalty kick after Otamendi fouled Mikkhytarian inside the box. Aubumeyang stepped up but failed to converts the spot kick after a superb save by goal keeper Ederson who went the right way to deny Arsenal a goal. 0:3.

The second 45 minutes had fewer attacking threats from both teams.On a cold night in North London, run away Premier League leaders Manchester City recorded a double on Arsenal with the same score line from their last encounter.