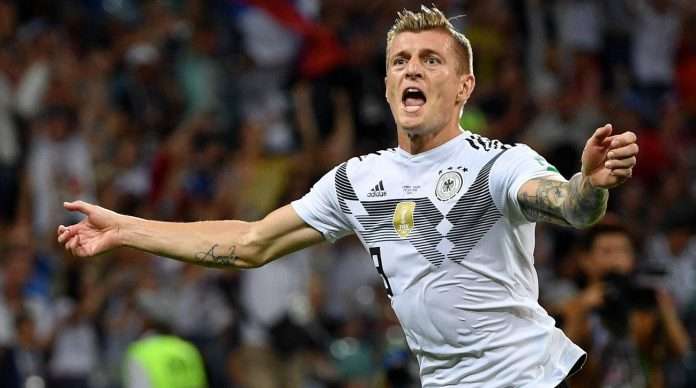 A great night of football in Russia 2018 World cup as Germany beat Sweden 2-1 at the Fisht Olympic Stadium in Sochi.

The Germans showed great character and fighting spirit as they come from a goal down with a man defictto beat sweeden with virtually the last strike of the game.

32′ Toulouse striker Ola Toivonen opened the scoring for the Swedes as they go into the break with a one nil win. His shot took a heavy deflection off Rudiger into the top left corner leaving Neuer stranded. 0:1

48′ 3 minutes into the 2nd 45 minutes, Marco Reus restored parity to the contest with a tapping deep inside the box. Game on! 1:1

82′ Bayern Munich defender Jerome Boateng was shown his marching order for his second bookable offence of the game for a reckless challenge.

90+5′ Germany were awarded a free kick at the left flank, training ground stuff between kross and Reus as he steadies the ball for Kroos. Toni Kroos right foot curler from the edge of the box goes straight into the top right corner. Stunning goal! Great win!

The Germans are level on three points with Sweden while Mexico top the group on six points. Lots to play for in the final group game as Germany play South Korea next while Sweden play Mexico