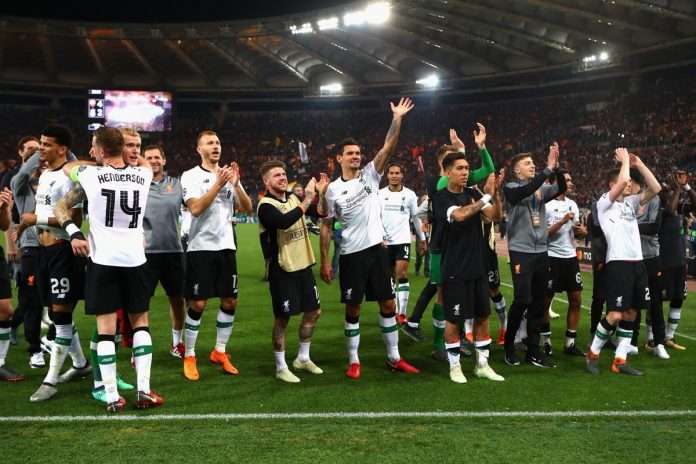 As Roma Roma Bow Out From the Champions League semi final with their head up high after an emotional night of football in Rome.

Liverpool edged past Roma on a 7:6 Aggregate after they won Roma at Anfield 5:2 then losing 4:2 tonight. Both ties recorded the highest ever amount of goals scored (13) in the history of he competition.

9’Sadio Mane eased the tension for the travelling Liverpool faithfuls with an early goal. Liverpool capitalized on a misplaced pass by Radja Nainggolan with sharp attacking football which was cooly converted by Mane. 1:0

15’The lead was short lived as the game was level through a James Milner own goal. He was very unforunate as Alexander Arnold’s clearance richoets off him ino his own net. 1:1

25’Liverpool were back in the lead once more with a close range header from Georginio Wijnaldum as AS Roma failed to clear their line.

52’Veteran striker Edin Dzeko puts his name on the score sheet as he pulled the game level for the second time with a rebound inside the box. 2:2

86’Belgian midfielder Radja Nainggolan showed incredible technique as he scored a wonder goal from long range. His one-time strike was precise and cannoned off the right bar and into the goal leaving goal keeper Karius stranded. 3:2

Liverpool were able to withstand series of late Roma Attacks in a very nervy and entertaining encounter in Rome.

90+3 Late in the game, AS Roma were awarded a penalty for a hand ball by Klavan inside the box. Radja Nainggolan stepped up and converted the spot kick with an unstoppable attempt. 4:2

As Roma needed a goal to push the tie into extra time but there was not enough time as the Referee blows the final whistle after the spot kick.

Liverpool were able to hold on in a tight contest and deservedly won themselves a spot in the finals against Champions Real Madrid on May 26.