Everton have resigned Wayne Rooney from Manchester United in a two year deal.

The 31 years old striker made his debut for his boyhood club at the age of 16, before becoming the highest goal scorer in Manchester United history.

Wayne’s return is part of the deal that sees Lukaku join Manchester United for up to £90 Million.

Wayne has previous hinted that the only premier league team other than Manchester United he will play for was Everton. 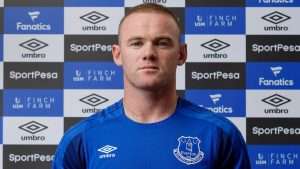