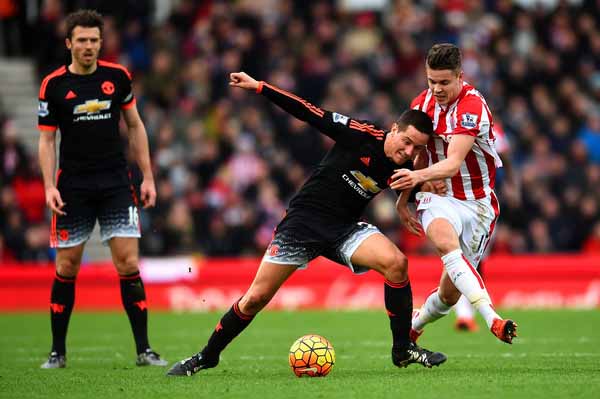 Ander Herrera has insisted that him and his teammates must match Stoke’s attitude in other to continue their perfect start to the Premier League season.

Herrera who won last year’s Sir Matt Busby Player of the Year is aware of the tense atmosphere that will meet the Red Devils at the Bet365 stadium with Mark Huges men inspired by their victory against Arsenal before the international break.

“The Premier League is very long and every team can beat you,” Herrera told MUTV. “Now we have to face Stoke, and we’ve had four seasons without winning there. It’s been a good way to start [the campaign] but we cannot relax.

“We are ready to face them and, hopefully, the weather is not so bad there because, when it is bad, it is very difficult to play. We are ready. No excuses – let’s try to win there. We are Manchester United, so we are not scared.

“Always, against Manchester United, every team or every fan of the opponent are waiting for us. It’s a big day for us. We have to be equal to their attitude and then we have to show our quality. The first thing is the attitude. The atmosphere is going to be against us, but that is normal.”