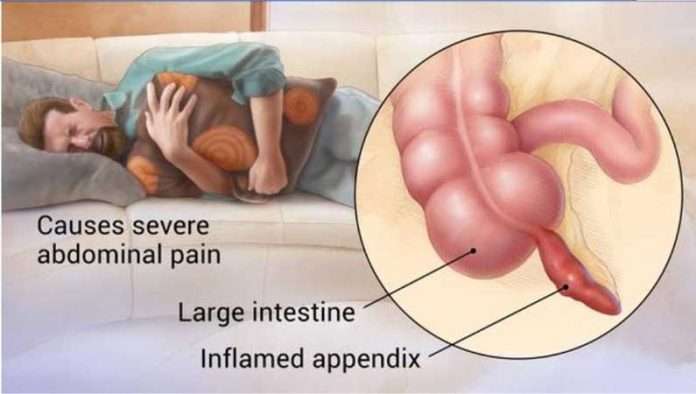 Appendicitis is a common cause of death and since the symptoms, signs and diagnosis are non specific it can be easily overlooked.

Appendix is a worm like bag attached to one end of our large intestine. It has no function but can cause a lot of trouble if it filled up by feces. Unfortunately some people have a wrong notion that guava seeds, orange seed swallowed bubble gum etc. feels up the appendix, it is all false!

When the appendix is filled up by fecal matter or stool, it becomes swollen or inflamed, this is called appendicitis. It may be infected by bacterial and could ruptured spreading fecal matter and bacterial all over the abdomen. This is very dangerous and could lead to death.

Signs and symptoms of appendicitis include severe abdominal pain especially on the right lower part, vomiting. Scan tests can also pick an inflamed appendix but sometimes it can be an emergency.

Antibiotics might arrest the inflammatory process if it is at its early stage but the definite treatment is surgery, removal of the diseased appendix.

Appendix is not a disease it is found in every human being. Appendicitis on the other hand is the inflamed appendix which is the ailment.